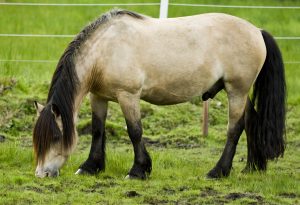 A hard working, adaptable and energetic horse, is what you will typically find in a Dole Horse. The Dole Horse is used today in pack work, farm work, transport, trotting and harness racing. Their active gaits and high energy levels make them a horse often noted for high stamina.

The abilities of the Dole Horse have only improved throughout the past few years and due to intensive breeding programs it appears as though that trend of continued improvement will keep on for some time. Today there are two types, which the Dole Horse can fall into. One is a light draft horse, the Dole Trotter and the other is a heavy workhorse, the Gudbransdal.

The Gudbransdal is a small and tough horse used for heavy work such as farm work and transport. Due to a large amount of interbreeding, however, the Dole Horse is becoming more uniform and the differences are beginning to dwindle. Both types of the Dole Horse share many common characteristics. They both have a pony- like head that is quite small.

This includes a wide forehead and a square muzzle. The neck of the Dole Horse is crested and short and they have a very straight profile. A deep body, strong chest, and strong shoulders make up their very powerful body. Short, strong, thick limbs are always characteristic of a healthy Dole Horse. 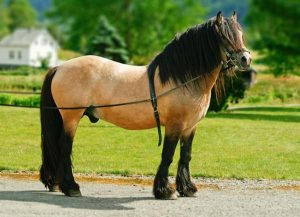 They have hard feet and feathered heels. The Dole Horse is one of the smallest, cold bloods and the average Dole Horse stands at about 15 hands high. The Dole Horse is typically black, brown or bay though it is not unusual to find chestnut, gray and dun colored horses as well. Among the Dole Trotter especially, there are also sometimes white marking along the head and legs.

The Dole Horse has its origins in the Gudbransdal Valley in Norway. It shares its ancestry with the Fell and Dale Ponies as well as the Friesian Horse. Although there is no written record for it, it is believed that in the fifth and ninth centuries, Friesian merchants took their stock both to Norway and Britain, where they were bred with native breeds.

It was under these conditions that that two different types of Dole Horses developed. The heavy Gudbransdal type was saved in 1962, when the state stepped in after breeding numbers had been depleted due to mechanization and World War II.