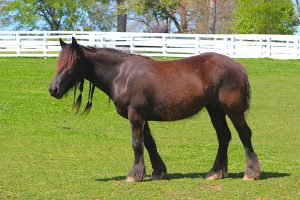 Dales Ponies are energetic, have a great stamina, and are hard working animals. They are great for riding, driving and trekking. They are great sport horses as well. They are also very intelligent creatures. Adding to their appeal, they are also inexpensive to keep. They can lead long lives, and it is not uncommon for mares to give birth in their twenties.

Dales Ponies are an attractive animal. With a mature height of roughly 14 hands, the Dales Pony is medium sized. They are usually colored black, brown, gray or bay. Some have white hair, though allowed only on their hind legs. Their most outstanding physical features are their feet and legs, which are shaped well and allow them to be quite dexterous. 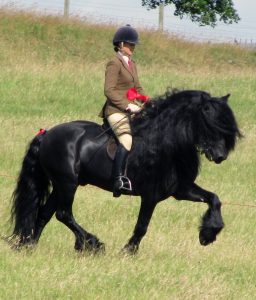 Dales Ponies have well-sprung ribs and a great chest, with sloping shoulders, a thick, muscular neck, and a small head with an abundant forelock and mane. The Dales Pony was bred in the eastern slopes of the English Pennines, in Northern Yorkshire. These river valleys, dales, gave name to the ponies.

They were bred to be pack ponies, but soon gained renown for their agility and ability to navigate through rough terrain. They served in World Wars I and II for the Army, carrying supplies and pulling munitions. After the war, ponies that weren’t killed during action, were eaten by the starving Europeans.

With the advent of cars and trucks, their usefulness so undermined, they were slaughtered unthinkingly. Down to just four registered ponies in 1955, they were rescued by devotees of the breed and in 1963 The Dales Pony Society was formed ensuring their continued existence. In 1971, their categorization changed from endangered to rare.