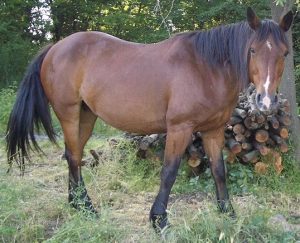 The Criollo is a descendent of Spanish horses brought to Uruguay and Argentina by Spanish settlers. They were free-roaming horses for centuries, developing into a strong, versatile breed capable of great feats of endurance. They are traditionally used by the Argentinean gauchos for farm work, as draft horses, or for pleasure riding.

Because of centuries of living in the open air, the Criollo has developed into a very powerful animal. Centuries of natural selection, under which only the strongest, most able animals can survive, have created an animal that can live in almost any conditions. Criollos are best known for their endurance. A Criollo can travel 470 miles in 15 days, carrying 240 pounds and with no extra food besides grazing, as has been shown through various endurance-riding competitions.

A sturdy, muscular horse, the Criollo averages between 13.3 and 15.3 hands. Although they appear in a large variety of colors, in Argentina and Chile, horses of Tobiano coloring are excluded from registering, and the gateado (translates as ‘cat-colored) coloring is preferred. Many Criollos have dorsal stripes and/or zebra stripes on the legs. Their neck is short and the tail is carried close to the buttocks. They have a profuse mane and tail.

As mentioned above, today’s Criollo is the descendent of Spanish horses that escaped or were left behind by Spanish settlers and explorers. These feral horses lived in the wild for over 400 centuries and became the powerful, sturdy breed known today. They did most of their evolving in the Pampas regions of Argentina and were bred by the Argentinean gauchos for their strength. 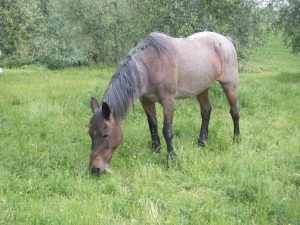 Before they were domesticated, the feral free-ranging horses were known as baguales. The baguales also mixed with other breeds of horses brought through the region, including Portuguese and Dutch horses. The native tribesmen eventually realized the benefits of possessing these horses and they increased the tribe’s mobility greatly. Unfortunately, as more settlers entered into South America, their fences, crops, and livestock began to have a great affect on the baguales.

In 1806 and 1825, British and French invaders brought with them Thoroughbreds and Percherons, and “improved” the native horses with their breeds. Because of this crossing, the original Criollos were threatened with extinction. Luckily, the Sociedad Rural de Argentina was formed in 1917 to prevent the destruction of the breed. They located a herd of 200 mares that had been kept by one of the native tribes and used this herd as foundation stock to revive the breed.