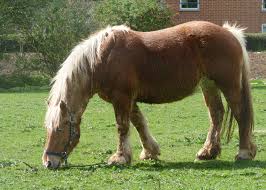 The Comtois is a fairly heavy horse that has been used primarily as a work horse. Often, the Comtois can been seen pulling sleds at ski resorts as well as other heavy work. The Comtois is known as an intelligent animal is a well-suited for farm work and makes an excellent assistant to small farmers.

The Comtois is a draft horse, although it is considered to have a fairly light build, standing at from 14.1 to 15.1 hands high. In spite of its relatively small size, the Comtois is very muscular and is quite stocky with long back and strong legs. This horse has a large head and intelligent eyes. The ears of the Comtois are small and perky. 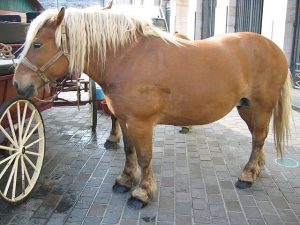 The Comtois has a thick mane and tail that are light in color and can be seen in a variety of shades of chestnut and are often quite dark, almost a chocolate brown or bay coloring. The name Comtois comes from the “Frache-Comte” region that is found on the border of Switzerland and France.

The Comtois is an ancient breed that has records of its existence dating back to the sixth century. It is thought that the ancestors of the Comtois were brought into France by Germanic peoples known as the Burgundians somewhere around the fourth century A.D. Primarily a working horse, the Comtois was seen and known the Jura Mountains and Massif Central since the 1500’s. The Comtois is famous, in part, because it was the mount of Louis XIV.