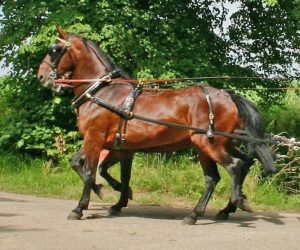 The Cleveland Bay is a large horse that originated in Britain. It is, in fact, the oldest established breed of English horse and was well liked as a carriage horse, a hunting mount, and the riding horse of the English Royalty. Known for its ability to work in even the muddiest of conditions, the Cleveland Bay is even today the favorite horse of the upper class in England.

Although it is estimated that there are fewer than 500 Cleveland Bays worldwide, international enthusiasts are fighting for its revival. They are highly valued for their durability, longevity, and quiet disposition. A horse of great substance, the Cleveland Bay averages between 16 and 17 pounds and weighs between 1225 and 1500 pounds.

They are always bay with black points, mane, and tail. A small white star is possible. They have clean legs with neat, sound feet. They have very powerful legs and quarters, which make them ideal competitors in jumping and dressage. Their strong shoulders give them an advantage in carriage work and dressage. 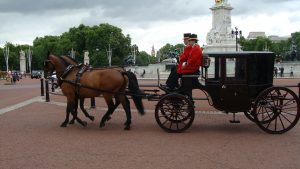 They were traditionally used as hunting mounts, coach or packhorses, and agricultural workers. They were originally known as Chapman Horses. The first volume of the Cleveland Bay Horse Society was published in the late 1880s, during the peak of the breed’s popularity.

Unfortunately, during the late 19th century the breed’s population rapidly declined, due to the advent of the mechanical age. They were used as artillery horses during World War I, which further decimated the breed. By 1960, only a few (five or six) mature stallions were known to exist.

Luckily, the breed’s admirers in Yorkshire fought to revive the breed. The Queen of England has become the patron of the breed, and her Royal Mews use Cleveland Bays in ceremonies. There are now around 500 Cleveland Bay Purebreds worldwide.