The Chincoteague pony is a stunning animal. They are a hybrid so many variations are seen. Most somewhat resemble an Arabian or Mustang Horse. It is small, reaching a maximum size of 12 to 14 hands at maturity. They come in almost every color variation, and they often have a painted pattern.

Their heads are large, with broad foreheads and large eyes. Chincoteague Pony have small ears that are tipped in, large nostrils and rounded jowls. They have thick manes and tails, and are strong boned. A full sized Chincoteague Pony will weigh around 750 pounds.

The Chincoteague pony has its history on the Island of Assateague, a tiny island, uninhabitable by humans, off the coast of Virginia. A tale tells of a Spanish ship heading to the Americas that crashed near the Assateague Island during the 1700’s. The Spanish were carrying Barb Horses, which managed to swim to the Assateague Island. 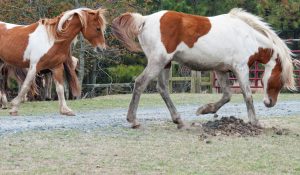 Swimming to the island is quite believable in that today the ponies swim from Assateague to Chincoteague (under the auspices of the Chincoteague Fire Company) where many are auctioned of to raise money for the Fire Company. The rest of the herd then swims back to their island.

More likely, though, the breed probably developed from local horses taken to the barrier island for grazing. There natural selection created the modern day Chincoteague Pony. A book, Misty of Chincoteague, published in 1947, made the ponies famous and children across the United States clamored for one of their own, spreading the pony across the country.

The Chincoteague pony eats mostly Saltmarsh Cordgrass, as well as American Beachgrass. These grasses are supplemented with Greenbriar stems, Bayberry twigs, Rose hips, seaweeds, and Poison Ivy. Due to their high intake of salt, the Chincoteague Pony needs twice as much water as other horses.