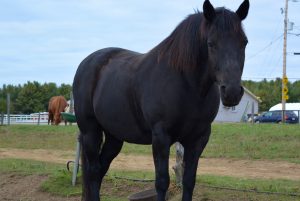 Today, the Canadian Horse is not a very well-known horse. However, this was not only the case. Due to the fact that this is an extremely hardy horse, the Canadian horse was at one time very popular. They possess strength, intelligence and a gentle disposition therefore making them wonderful horses in a multitude of situations.

Not only is the Canadian Horse popularly used for driving, this horse is also known for its abilities in various events (jumping, dressage etc.) and the Canadian also makes a popular family horse and does quite well with children, due to their gentle personality.

They are usually seen with a black coat, although bay and chestnut and brown are also seen. The Canadian has a luxurious mane and tail. The Canadian Horse has an interesting history. This horse is a product of horses sent into the New World by the French king, Louis XIV in the 1600’s.

For many years, these horses bred with little influence from other breeds and a result of this was a hardy, easy to keep and care for horse that was able to withstand cold temperatures. In the 1800’s over 150,000 Canadian Horses were found in the United States and Canada. 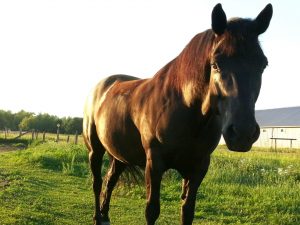 The Canadian was used in breeding to improve the strength of other breeds. Additionally, the Canadian was exported to other countries for a variety of work purposes. However, after the popularization of mechanized farm machinery, the numbers of the Canadian Horse dropped rapidly. In the 1960’s and 1970’s there were fewer than 400 Canadian Horses.

Fortunately, in the late 1970’s this breed made a comeback, due to the efforts of Canadian breeders and the Canadian government. These breeding programs were successful and now there are over 2,500 of them. In spite of breeding successes, the Canadian Horse is still classified with a “critical” status by the American Livestock Conservancy.