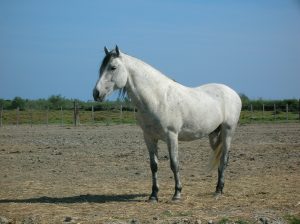 The Camargue Horse originates in France and is recognized as a pony. It is a hardy, primitive horse that is so true to type it can be difficult to tell one horse from another. Small herds of Camargues still roam free in the south of France. An herbivore, Camargues both in the wild and in captivity rely on grazing for food.

While in the wild, a Camargue may graze for 22 hours a day when food is short. Otherwise, they graze only at dawn and dusk. Because their natural environment is so harsh, they are slow to mature. Primarily a wild animal, the Camargue is willful and independent. They can be quite difficult to capture, and then more difficult to train.

However, once trained the Camargue is a loyal and helpful friend who will carry its master over the most difficult of terrain. The wild herds usually consist of one stallion and harem of mares and their foals. Most often, fillies are caught as yearlings, while colts that are not to be bred are gelded at about three years old.

The breeding is usually done in the wild but under supervision because the breed is very well protected. Humans have been able to observe the interactions of the wild horses because they are so isolated. The Camargue is a lively animal but when trained is very good-natured.

A small animal, the Camargue averages between 13.1 and 14.1 hands high. They have a large, square head with widely set ears. The neck is short and the shoulders upright, the back short and strong. They are very muscular with strong legs. They are very rarely shod. Camargues are almost always gray in color. Because they are so true to type, they can be quite difficult to tell apart. 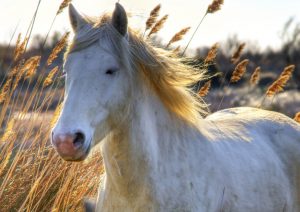 One of the oldest breeds in the world, the Camargue is believed to be a descendent of the primitive breeds seen in cave paintings from 1500 B.C. Many people believe they are related to the now extinct “Soutre” breed. The original stock was unsullied until the 8th or 9th centuries, when they were likely mixed with Barb horses brought from North Africa by the Moors.

They are often called the “Horse of the Sea,” because the region in which they live is quite marshy. In 1968, the breed was officially recognized and breeding became more selective and controlled.