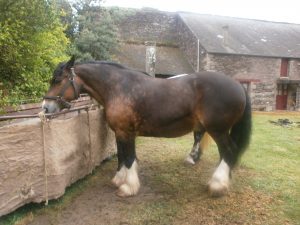 The Breton Horse is mainly bred for meat production in France today, however it remains on small farms and vineyards where it is used as a workhorse. It is used to gather seaweed as well and the Breton Horse is used in teams as a coach horse. The stamina, kind and good-natured way that the Breton Horse has about it, as well as all of its energy and strength, has made the Breton Horse the most widely used draft horse in France. For these reasons, it has also been widely exported throughout the world to improve lighter stock.

A broad, square, kindly and straight head is what you will find on the Breton Horse. They have small and low set ears as well as a short, arched and strong neck with short slopping shoulders. Well-sprung ribs are characteristic of the short and broad body and the limbs are very muscular and short as well.

The Breton Horse stands 15 to 16 hands high. The feet of this horse are medium in size, very hard and there are minimal feathers. The tail of the Breton Horse is docked short and both the tail and mane are flaxen. Chestnut is the most common coat color among the Breton Horse, however, it is not unusual to see roan or gray as well.

The horse that is considered the more aristocratic and beautiful horse, is the Postier Breton Horse. This particular type stands at an average of 15.1 hands high. This type of Breton Horse carries itself with an easier gait than the others. For this reason, it is used mainly as a coach horse but is capable of light farm work. 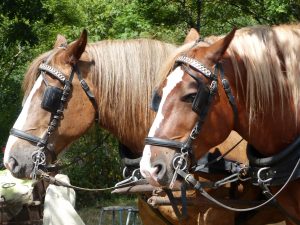 The Breton Horse has a very old history. Some say that over 4000 years ago, Aryans who were coming over from Asia brought the Breton into Europe. Still others will claim that it was Celtic warriors who bred smaller horses for improvement. Either way, these horses have been bred throughout the centuries to meet the needs of those that they were doing the work for.

They were used during the Crusades at which time they were bred with Oriental Horses and thus there was the Bidet Breton. By the end of the Middle Ages, standing at 14 hands high, both the Sommier used for agricultural work and the Roussin used for riding, were identified. Today, the studbook that was started in 1909, distinguished between the three types that we see today.