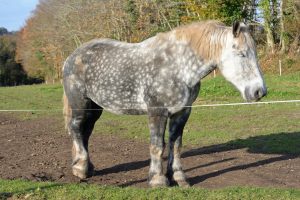 The Boulonnais Horse is generally 15 to 15.3 hands high. It carries a short and broad head, very elegantly. They have a fairly wide and prominent forehead and bright eyes. Their ears are small and erect and fairly mobile, well opened nostrils, their neck arched and thick and their mane is fairly thick and short as well. The shoulders and hindquarters of this horse are extremely muscular.

They have a well-rounded rib cage, a straight back and a very broad chest. Prominent and strong projections are apparent in the forearms and thighs and they also have large, flat joints and thick cannons. The tail of the Boulonnais is very thick and high set. Though they do have some feathering on their legs, the Boulonnais for the most part, has very little hair on their legs. Coat color is generally gray but roan, bay and chestnut are also often seen in this Horse.

There are two types of Boulonnais Horses that have developed over time. The smaller type is known as the Mareeur or Mareyeur. It was given this name for its reputation as being a fish cart horse, as they were used to deliver fish from Normandy to Paris. This is the better-known type but the other larger type known as the Maree has also played its own important role. The Maree was developed to work in agriculture, is very strong and weighs well over a ton. 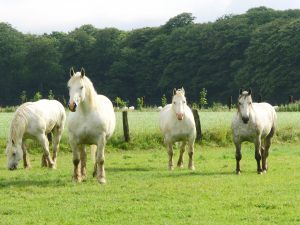 It is thought that the Boulonnais Horse is a descendant of Arabian Horses that were imported by Caesar to the coasts of the Pas-de-Calais in France, right before his invasion of Great Britain. Later crosses with Oriental and Andalusian blood, which came during the Crusades and the Spanish occupation of Flanders and still more crossing with Mecklenburg blood from Germany made the Boulonnais Horse what it is today.

World War World War II and I seriously depreciated the numbers of Boulonnais Horses but with the help of government funding, their numbers are now on the rise. Today the Mareyeur is branded with an anchor on its neck in order to symbolize its past.