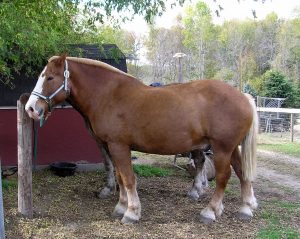 A horse-pull is a contest between teams of horses to determine which team can pull the most weight the farthest. The contest uses a steel sled loaded with weight made from either cement blocks or steel rails. There is also a machine known as the ‘dynomometer’, which is mounted on a flat bed truck. These animals are trained and worked every day just as a weight lifter.

Additionally, the Belgian is used in New England for collecting maple syrup from maple trees. A handsome, powerful looking horse, the Belgian stands anywhere from 15.5 to 17 hands high and can weigh anywhere from 1,760 pounds to a ton, and it should be noted that this horse is quite muscular. These horses can be classified as either light weight or heavy weight depending on how much they weigh.

As the name would imply, the Belgian comes from the country of Belgium, which is located in Western Europe. In Western Europe (around the Belgium area), the predecessor of all modern draft horses came into being. These large, black horses were called “great horses”. “Great Horses” were used by knights and were ridden into battle. Later, stallions from Belgium were sent to other European countries in order to breed large draft horses.

Eventually, the Belgian became a fixed breed. It was valued highly by the nation of Belgium and was considered a “national treasure”. It should be noted that the Belgian was not a very popular draft horse in the United States, until the turn of the century. In 1903, three Belgians were at an exhibit at the St. Louis World Fair and the International Livestock Exposition in Chicago. This show, although stirring a great deal of controversy about the suitability of the Belgian as a draft horse for Americans, led to greater recognition and interest in this breed. 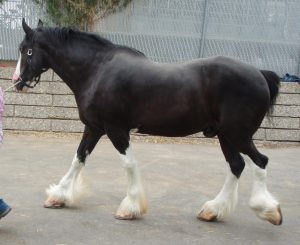 After the war, numbers of the Belgian dropped, although numbers climbed again until right before World War 2, when numbers reached 3,196. In should also be noted, that during the 1920’s and 1930’s, in spite of everything, the Belgian was still the number two draft horse in the United States.

Unfortunately for all draft horses, mechanization put all draft horses, including the Belgian, into danger and numbers fell sharply. Fortunately, breeders, farmers, and, not surprisingly, the Amish prevented this amazing horse from disappearing entirely; and in 1980, numbers of the Belgian climbed to greater heights than ever before.