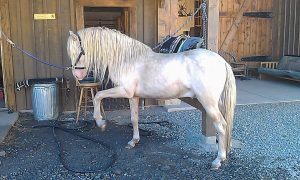 The Barb is an intelligent, dependable horse whose stamina and hardiness make it a perfect horse for a multitude of situations. He is useful in both sport and jumping, though he is generally used as an all-purpose riding horse. Additionally, the Barb is relatively easy to keep due to its tough nature and that it is considered an economical feeder. This horse is known for its endurance and agility. They have reliable temperaments yet they are spirited.

The Barb is of average size, standing from 14.2 to 15.2 hands high. The Barb is usually seen in shades of gray or black although other colors such as bay, chestnut or a dark brown can be seen. Although the Barb is very sturdy, it is not very stocky and can even be considered to have a rather “delicate” build. The Barb has a rather narrow head and a lovely arched neck. The body of the Barb is fairly short and the legs, while strong, are rather slim and long.

The Barb comes from Northern Africa. The name “Barb” comes from the Barbary Coast, which is on the coastlines of Tunisia, Morocco and Algeria. There isn’t a great deal of information regarding the origins of the Barb although one theory suggests that the Barb is a descendant of ancient wild horses that had survived the ice age. If this is the case, the Barb is older than even the Arab. 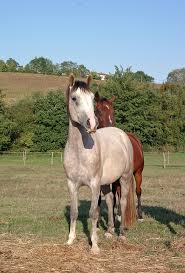 There is another theory that states the Barb is tied in with the Akhal-Teke, a horse of the Turkman. Whatever the Barbs heritage, the Barb has had a great influence on modern day horses, its influence being second only to the Arab. The first time the Barb was really seen in European countries was around the eighth century and can be linked with the spread of Islam.

The Barb was a major player in the development of the Andalusian (known as one of the major horse breeding influences the world over) when the Barb became really established in the Iberian Peninsula. King Richard the second owned Barbs and Henry VIII was responsible for importing a large quantity of Barbs into Europe. The Barb was even used by calvarymen due to the Barbs sure-footedness and quick movements.