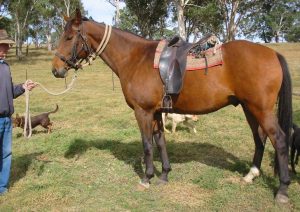 The Australian Stock Horse, also known as the Waler, is a versatile breed with a long and illustrious history. Best known for its stamina and hardiness, the nearly extinct Waler is being revived in Australia. Although the Waler was originally bred as a working horse, and is still a working horse today, they are becoming better known for their abilities in the sporting arena.

They are quite versatile, fast, and have great endurance. They also have a friendly disposition and are loyal to their masters. They are excellent animals for adult and child horse-lovers alike, and have been successful in Endurance, Dressage, Show Jumping, Cutting, Dressage, and Pony Club.

Because the Waler is a mix of many different breeds, it can appear in all possible coat colors. They have an alert head, a broad forehead, a long neck, sloping shoulders with a well-defined wither, a deep but not broad chest, and a strong back. The legs are muscular and well developed, as are the quarters.

The Waler as it is known today evolved through selective breeding. When the First Fleet brought horses to the colony of New South Wales in 1788, the horses on-board were primarily of English Thoroughbred and Spanish stock. Later importations included Arabs, Welsh Mountain Ponies, and Timor. The colony was located in rugged country, and to survive, the horse needed to be rugged as well.

The horses were bred for stamina and versatility, and unsuitable animals were destroyed. The stronger horses were used to work and to breed the type that would eventually become the Waler breed. Because of their amazing endurance, they were the ideal choice for a mount for the British army in the Indian Mutiny. In 1857, 29 horses were sent to Calcutta from Sydney. 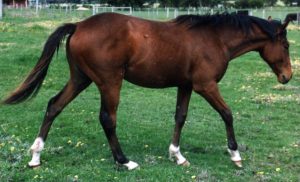 This number eventually increased to 2500, and in 1902, 16,000 Walers were imported to serve as mounts for Lancers, Mounted Rifles, and Busman Troop. This trend continued, with Australian Stock Horses being imported for use in the Middle East during World War I. However, after World War I, when more and more industries were being mechanized, the need for workhorses decreased and the Walers began to die out.