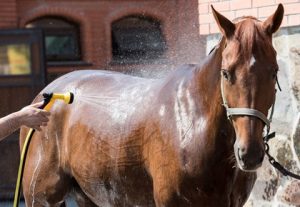 The Anglo-Kadarba, or “Anglo-Kabardinskaya” as its known in its native Russia, is a breed best known for its endurance. It was bred by crossing Kadarba mares with Thoroughbred stallions and retains the best characteristics of both breeds.

It has been successful in both national and international competitions, including the Olympics. Native to the Caucasus region of Russia, the Anglo-Kadarba is capable of navigating difficult mountain terrain. It has retained the size and speed of the Thoroughbred and the endurance and adaptability common to the Kadarba.

While they are not particularly speedy racing horses, they are fairly quick. They have high action, and even and rhythmical walk, and a light and smooth trot and canter. They are best known, however, for their endurance. They are often used as cavalry mounts in armies and in endurance trail-riding competitions.

They are also used as saddle-mounts on the farms in the Caucasus. The basic type of Anglo-Kadarba is the mountain riding horse. There are also oriental types and massive types. Anglo-Kadarbas are kept in herds. If stolen are lost, they can find their herd easily. The mares are very fertile and foal well into old age. They are very protective of their young. Likewise, Anglo-Kadarba stallions can produce until they are in their 20s.

The sires are very protective of their mares and even the keepers approach them with caution. The herds migrate into the Alpine meadows in the spring. In August and September, they return home where the stallions are once again separated from the mares. The winters are either spent out or inside enclosures, grazing and given some hay. They foals are weaned in November.

Somewhat larger than the Kadarbin but smaller than the Thoroughbred, Anglo-Kadarbas are a medium-sized horse. The basic type is well muscled and lean, with a well-shaped head. The oriental type shows the influence of mixing with oriental breeds and has clean legs, smaller heads, and expressive eyes. The massive type is larger, with longer bodies and larger bones. They are closer in appearance to a carriage horse.

Crossing Kadarba mares and Thoroughbred stallions in the Caucasus region of Russia, as mentioned above, breeders developed the Anglo-Kadarbin. They were bred at the Malokarachaevski and Malkin stud farms. The most important stallions were “Lestorik,” a bay bred in 1939; “Lukki,” also in 1939; and “Lok-Sen,” a dark-bay bred in 1923. Thoroughbred breeding comprises between 25 and 75 percent of today’s Anglo-Kadarbas.