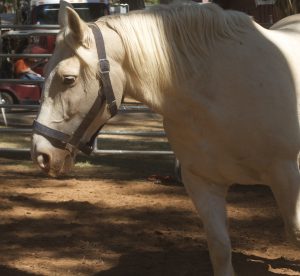 Old King was born in 1908 and had pink skin and a white coat. A stocky animal he was intelligent, gentle and used for riding and parading. When Old King was bred to colored mares, it was found that 50% of the foals he sired had the same white coloring. In 1917, Old King was sold to Caleb and Hudson Thompson, who hoped to create a new breed of horse. Using selective breeding methods, they were successful. In 1936, Hudson dropped out of the business when Caleb married Ruth Hackenburg.

Together, they continued to breed the American Albino. The Thompson’s and their Albino horses became known internationally and they started a children’s riding troupe and eventually, the troupe was seen with various celebrities. In 1937, the Thompson’s started the American Albino Horse Club, or AAHC. The very first horse registered with the AAHC was the grandson of Old King, Snow Chief the second. After the death of her husband, Ruth was forced to sell the majority of her herd, except for a few animals and it should be noted that Ruth continued to maintain the registry under the name of the American Albino Association.