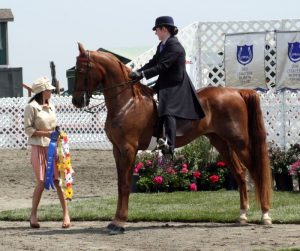 The American Saddlebred is primarily a show horse. With proper attention and care, they are intelligent, fun, friendly horses that are great for show or riding.

They have an elegant gait and are comfortable to ride. They have an elevated action when walking, trotting or cantering. They have three gaits, including the fourbeat, a ‘slow gait and the ‘rack,’ performed at full speed. The hooves are usually shod with heavy, padded shoes. The American Saddlebred has a lifespan that usually ranges into the late 20s or early 30s.

The American Saddlebred has long hooves and a high neck. The tail is usually set high, often by cutting the ligaments at the root of the tail. However, this practice is going out of style and more owners and trainers are using false hair to achieve the affect. The padded shoes are also becoming used less often, in a style known as the ‘Natural’ American Saddlebred.

These horses traveled west into Kentucky with settlers and became seed stock, giving Kentucky its reputation as a horse producing stock. During the war of 1812, American Horses were used in the fight against the British and the Native Americans. After the war, breeding these horses that had earned a great reputation became Kentucky’s first priority. They were important in the settling of the Ohio Valley, Tennessee, and the Western United States. 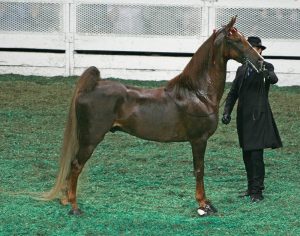 Missouri especially started breeding the saddle horses, and Missourians are known for saying “If Kentucky made the Saddle Horse, then Missouri made him better.” The first official horse show was at Lexington, Kentucky in 1817. Gaines’ Denmark was one of the primary horses used in breeding the American Saddlebred. Of the first three volumes of the American Saddlebred Association registry, over 60% of the horses can be traced to Gaines, Denmark.