The American Bashkir Curly is a breed of horse whose origin remains a mystery. They were found roaming the coasts of the Western United States when the first settlers arrived and are rumored to have been a favorite of the Native American. Whatever their history (which will be discussed later), the Bashkir Curly has become a much-loved breed in the United States. They are affectionate, docile, and learn quickly.

When taken off the open range and tamed, the fully-grown Bashkir Curly is quite often calmer and gentler than other breeds of horses that had been handled for years. This demonstrates their extreme calmness. They are also quite intelligent and capable of learning exceptionally quickly, due to their amazing memory. Bashkir Curlies have won awards in all major events, including Western Riding, Western Pleasure, Reining, Gymkhana, Hunter, Jumper, Roping, English Equitation, Dressage, Gaited Pleasure and Driving.

They also have very high endurance, and are known for their success in Competitive Endurance Trail Riding. Bashkir Curlies are known as “gaited horses” because of their natural running walk. The Bashkir Curly is amazingly sturdy, capable of withstanding temperatures as low as -30 degrees F.

A medium sized breed about the size of the early Morgan horses, the Bashkir Curly is said to represent many more primitive breeds of horses. For example, many have been found without ergots and many have soft, small chestnuts. They have widely set eyes like those common among Oriental breeds, which is said to give them a better range of vision. Their hooves are tough, black and almost completely round.

They have a higher concentration of red blood cells, straight legs, flat knees, a short back (indicating only five lumbar vertebrae), a round rump, and powerful shoulder. However, what really sets the Bashkir Curly apart from other primitive-type breeds is its coat. Foals are born with a curly, crinkly coat about 50% of the time, regardless of whether one of the parents had a straight coat.

The curls of the coat appear in all common horse colors, including Appaloosa and Pinto. The coat has several strange characteristics, including the ability to completely shed the mane hair, and sometimes the tail hair, and grow it back over the winter. This is likely a mechanism to cope with extreme matting that would probably result from the curly mane.

The body hair also sheds during the summer, although not completely, which causes the hair to be wavy or even almost straight rather than curly. The winter coat returns in late fall and often grown in patterns such as a crushed velvet effect, a marble wave, or extremely tight curls all over. 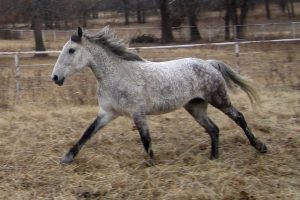 As mentioned above, the origin of the Bashkir Curly is unknown. Many people believe they came over the Bering Strait thousands of years ago. However, there is no fossil evidence to support this claim. Another possibility is that they were carried over by Russian Settlers. Many people believe they are related to the Russian Bashkir, although the fact that a curly coat is never exhibited in Russian Bashkirs belies this claim.

A Russian breed that does often have curly coats is the Lokai. However, there is no record that Lokais or Bashkirs were carried with the settlers in the early 19th century. The horses that were most likely carried were the Yakuts, and more than half of them died out during the voyage.

The modern history of the Bashkir Curly is better known. In 1898, Peter Damele and his father were riding in the mountains of Central Nevada when they came across a herd of Bashkir Curlies. From then on, Damele devoted his life to capturing, raising and breeding Bashkir Curlies. The American Bashkir Curly Registry was established in 1971, and there are about 1,100 Bashkir Curlies registered in the United States today.