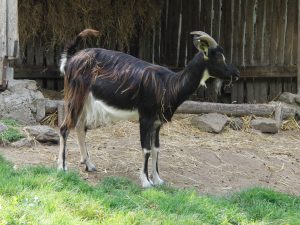 The Poitou, Poitevin, or Poitevine Goat is a dual-purpose breed, which has recently become quite rare! Thanks to conservation programs, hopefully the Poitou Goat will be able to recover a part of its numbers. Poitou Goats adapt well to many management systems, and are quite hardy.

They are mostly kept in the Poitou region of France and are quite rare, having been largely replaced by the better producing Swiss dairy breeds. At maturity, buck Poitou Goats stand at about 80 centimeters at the shoulder. Does are about five centimeters shorter. Bucks usually weigh around 72 kilograms, and does are 55 kilograms.

In coloration, Poitou Goats are usually darker shades of brown, and are characterized by their white undersides and pale legs. They have long hair and horns, and triangular shaped heads similar to those of Toggenburg Goats. Polled varieties are available. When used for meat, Poitou Goats have fairly lean carcasses with moderate musculature. 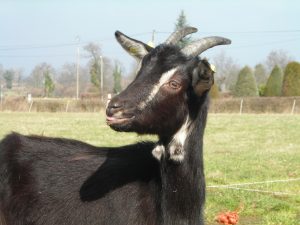 In dairy use, their milk is extremely high in fat and protein, although production is not as high as competing Swiss dairy breeds hence the decline of the Poitou. Some of the finest cheeses in the world are made from Poitou Goats’ milk, and the French remain quite proud of their rare dairy breed. Originating in Western France, Poitou Goats call the area of Poitou-Charentes their birthplace.

Today, the largest number of Poitou Goats is centered here, where they are used in cheese production. They come from the farms near the Sevre River, and by the turn of the 20th century, had become quite popular in the region and spread to nearby alpine regions. In 1920, a Foot-and-Mouth Disease epidemic nearly wiped out all Poitou Goats save the ones who had been taken into the Alps.

The Alpine Poitou Goats were used to build the numbers of the breed again, although they never really recovered due to their replacement with Alpine Saanen and Toggenburg Goats. Today, there are about 1,500 does used for reproduction and in 1991, a preservation program was instituted.

Poitou Goats are especially good at finishing off rough pastureland with high feed conversion efficiency. Because these goats are so rare, they should be bred responsibly. Poitou Goats are extremely hardy and can easily adapt to many management systems.

They thrive, however, when housed for six months of the year and offered mixed feed. Poitou Goats are currently in a preservation program, and many artificial insemination options are open to breeders. These goats have an average age at sexual maturity, but low litter sizes. They produce plenty of milk for their offspring. Poitou Goats have a sufficiently long mating season and average lambing intervals.