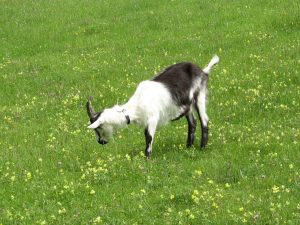 The dual-purpose Peacock Goat, though quite old as a breed, was not officially recognized until 1992 and at one point was very close to extinction! Peacock Goats are docile and easily trained. In fact, for many years they were used as lead animals in herds of goats of different breeds!

These goats are extremely hardy and agile, well adapted to mountain or pasture use. Also fairly weather resistant and insect-proof, Peacock Goats are quite vigorous! At maturity, a male Peacock Goat generally stands about 80 centimeters at the withers and weighs around 75 kilograms. Nannies follow at about 73 centimeters and weigh around 56 kilograms.

Their medium length hair is usually too thick for stinging insects to penetrate. The front part of the Peacock Goat’s body is white, except for the legs, which are booted black! The muzzle and the insides of the ears are also black. The back part of the Peacock Goat’s body is black, with white marks on the topside of the tail, the flanks, and the thighs! 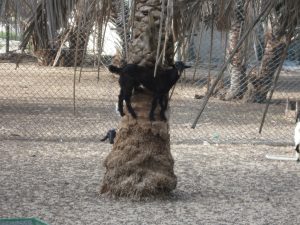 They have horns and black facial stripes! These stripes run in a V or fan shape; the shape of a peacock’s outline! They are called pfaven, and run from the base of the horns down to the nose and over the eyes! There are also dark spots on Peacock Goats’ faces.

Peacock Goats are also known as “Pfauenziege” Their name actually arose from a typo; a journalist writing about the goats misspelled their name, Pfavenziege (which derives from the stripes of pfaven) as Pfauenziege, which means Peacock Goat! The name seemed appropriate, so it stuck!

Peacock Goats probably arose from an old mountain breed native to the Tessin and Grisons cantons. They were used as lead goats by transhumant goatherds leading Verzasca herds through the mountains! At one point the Peacock Goat was believed to be a variety of Grisons Striped Goat, and much breeding took place between the two, diluting the lines rather than purifying them! 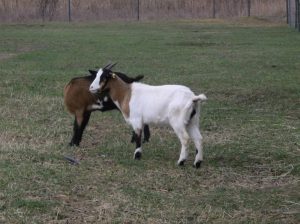 The first record of Peacock Goats comes from 1887. Enthusiasts kept small numbers of Peacock Goats for many years, but the breed was not officially acknowledged until 1992, when its herd book was established. Several breeding societies have been formed throughout Switzerland, in 1989, 1993, 1994, and 1996! There are about 300 of these goats in existence, and they are used mainly for their meat and milk.

Peacock Goats do best in care systems in which they are allowed to graze. They should be stabled for the coldest two to six months of the year, and will do fine eating mixed feed and fodder or grazing alone! Peacock Goats reach sexual maturity early. They are not especially good milkers, but can usually easily support their kids. Their milk has a good percentage of fat and protein, and Peacock Goat kids have a good daily rate of gain.