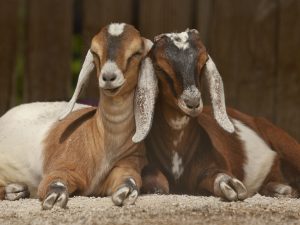 The Nubian Goat is believed to be the result of the crossbreeding of British goat stock with goats of Indian and African origin. There does appear to be a discrepancy between sources, however, with some saying it has Egyptian origin and another stating it to be a cross between Swiss and Egyptian or Indian breeds.

It is primarily kept for its dairy production but is also excellent for meat and hide production. The Nubian goat is the most popular dairy goat in the United States. It doesnt produce as much milk as the Swiss breeds, but its high butterfat content and long breeding season, which allows year-long milk production, make it a profitable breed.

Goats are excellent foragers and can subsist on land that would otherwise be unsuitable for agricultural purposes. Nubians also have the ability to eat a large amount of food in a short period of time, making them less susceptible to predators. They can adapt to various habitats but hotter temperatures will yield better milk production. 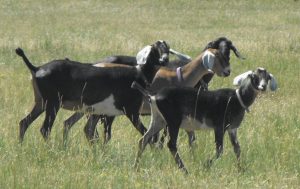 In hotter climates it is important to provide plenty of shade and water. Nubians are hardy goats and though there is some susceptibility to respiratory disease, they can and should be vaccinated against said diseases. Nubians also make great pets! Nubians have nice personalities and usually get along well with other animals.

Nubians have an average lifespan of 10 to 14 years, though some can even live longer. Hornless and always shorthaired, the Nubian Goat has a decidedly Roman nose giving it an “aristocratic” look. They have large, drooping ears that flare out a bit (resembling a bell) and thin, shiny hair.

The profile of the face exhibits a distinct breed characteristic being extremely convex between the eyes and snout. Nubians come in a multitude of colors; tan, red and black or combinations of these, with white being the most common. 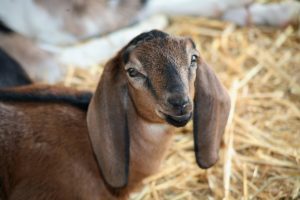 A mature female Nubian will be about 30 inches tall and weigh around 135 pounds or more while males stand 35 inches and weigh in around 175 pounds. The Nubian Goat, as it is known in the United States, is also known as the Anglo-Nubian due to its development in Britain.

The word Nubian refers to Nubia, a region in Northeastern Africa. Originally, the goats imported from Africa, Arabia and India, had traits desired by British goat herders and crossbreeding between these goats and the native shorthaired breed before 1885, and resulted in the breed we know today.