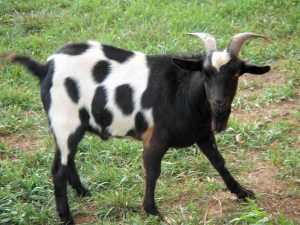 The Myotonic Goat, one of the few breeds native to the United States (although some sources trace them back to Turkey or India), is known by several other names. Tennessee Peg Leg, Texas Wooden Leg, and Tennessee Fainting Goat, to name a few.

They are somewhat of a novelty as a pet, as they “faint” at the slightest apparent stimulus. The phenomenon, known as “myotopia” is a product of recessive genes which causes the muscles to undergo a prolonged state of contraction which causes the goat to become stiff, temporarily. The Myotonic Goat is becoming increasingly popular as a pet, although it is still primarily bred for animal husbandry.

These goats are quite social and it is a good idea to have more than one for this reason. They don’t jump or climb fences and will eat just about anything, which makes them easy to care for. Myotonic Goats are good dairy goats. They are excellent breeders and will sometimes produce kids twice a year, with a high occurrence of twins and triplets. 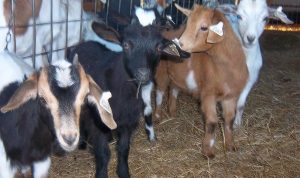 Myotonic Goats can be cross-bred with other breeds, but it is highly discouraged for fear of compromising the integrity of a breed which is considered to be rare (only 10,000 in existence worldwide) and is a high conservation priority. The color of the Myotonic Goat can be virtually any color known to goats. They come in a variety of sizes, with the larger generally used as meat producing herds.

Good conformation with heavy muscling is standard for the breed. Most Myotonics will have horns the size and shape of which are as variable as their color. The ears of the Myotonic Goat are smaller than their Spanish and Nubian relatives and larger than that of the Swiss breeds.

For the most part, these goats are shorthaired, although some cashmere producing longhaired Myotonics do exist. There are two acknowledged theories concerning the origin of the Myotonic Goat. One theory states simply that a spontaneous genetic mutation occurred in 1885 resulting in the emergence of this “fainting” gene.

The other theory is that the origin of the Myotonic goat can be traced back to four goats brought to Tennessee by a man named John Tinsley from Nova Scotia, or possibly Canada, in 1880. Their unique trait was first exploited by sheep ranchers. They would put some of these Fainting Goats in a herd of sheep.

When a predator made its presence known the goats would, of course, faint and the herd would be able to escape while the predator focused on this easy prey. This is, in fact, the origin of the term “scapegoat”. During the 1950’s, the Myotonic Goat was taken to the hill country of Texas where it was selectively bred for meat-producing characteristics.

Tennessee and Texas branches of the breed were recently rediscovered in the 1980’s by both the livestock and the pet industries. The International Fainting Goat Association was formed 10 years ago to encourage interest in this unique breed. The Myotonic Goat’s diet consists mostly of grain and hay, though they will eat just about anything and everything.

The Myotonic Goat can breed as often as twice a year, usually bearing twins or triplets. The does will sometimes hide their kids for several days. The kids can be any variety of colorings, so you don’t always know from the color of the parents, what the kids will look like.