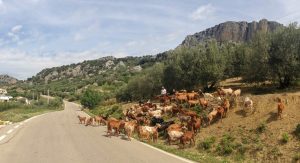 The Murcia-Granada Goat, a dairy goat known for its good temperament, is a valuable Spanish cheese-making source! This good natured goat is available in two sizes Murcia-Granada Goats are generally docile and easy to handle. They adapt very well to most management systems, whether extensive or intensive!

The entire body of the Murcia-Granada Goat appears slender and well balanced. They have very strong feet and legs and a short, erect tail! Murcia-Granada Goats have long bodies with full, deep chests, level backs and rounded undersides. Their heads are triangular, and the eye arches are well defined.

Occasionally, Murcia-Granada Goats have horns, but more often, they do not. Their ears are held erect and tassels are usually present, along with a marked beard in bucks. Murcia-Granada Goats are black or very dark brown in color, and have pigmented skin. The mucous membranes may be dark or they may be pink.

The hair on Murcia-Granada Goats is very short, but males have fringing of long, straight-standing hairs along the ridge of the spine and the neck! The strong udders of Murcia-Granada Goats are very full and symmetrical, with well-defined teats pointing forward and out.

Milk production varies among regional Murcia-Granada Goats, though Venguensi strains have better production rates than Montanas. Usually, in a 210-day lactation, 500 liters of milk are produced, although 729 kilograms is common. The fat content is about five percent and the protein percentage is about three and a third.

Generally, about 20 percent of Murcia-Granada Goats’ milk is used as milk, while the other 80 percent is used for cheese making! Murcia-Granada kids are used for meat, and are slaughtered at six to eight kilograms or 25 to 30 days. Occasionally, they are killed at 50 to 60 days or ten to 14 kilograms. The carcass yield is about 50 percent.

Although Murcia-Granada Goats have existed in Spain for many, many years, the herd book for this breed was not established until 1980! Generally, Murcia-Granada Goats were maintained in herds of about 55 goats, tended in pasture by a shepherd and sheltered at night, when they were fed a feed concentrate. 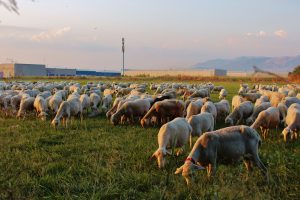 Typically, fresh Murcia cheeses are made from the milk, but renowned cured red wine cheeses are also produced from this breed’s milk. They are also called Granadina or Murciana-Granadina Goats, and comprise about 17 percent of Spain’s goat population.

Murcia-Granada Goats do best when housed for two to six months of the year, although they adapt extremely easily to almost any management system. These goats flourish in hotter climates. They are efficient grazers and are known for their ability to produce copious amounts of milk under relatively poor conditions.

Murcia-Granada Goats thrive on poor mountain pasture land. Usually, they are milked once each day. Murcia-Granada Goats have a reputation for having high libidos and being extremely fertile. They reach sexual maturity at eight to ten months and generally produce twins.