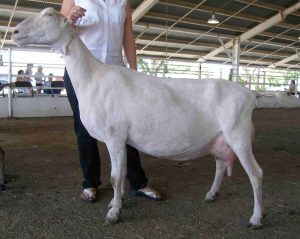 They are in fact the largest breed group represented at most shows world wide. The LaMancha is most easily recognized by its ears. There are two types of LaMancha ears, the “elf ear” and the “gopher ear”. The elf ear is approximately two inches in length. 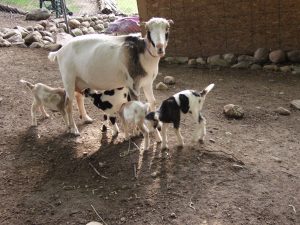 LaManchas have short fine hair that is accepted in a wide range of colors. Although the LaMancha is an American breed, it is thought to have been bred from Spanish goats brought to the Americas by settlers. The exact history of the LaMancha is not well documented.

The current LaMancha stems from a resurgence in their popularity in the beginning of the 1900s where they were bred by Phoebe Wilhelm. Today’s LaMancha goat only began to be registered in the 1950s. The LaMancha is generally thought of as easy to keep. It is an adaptable goat that thrives in a variety of settings.