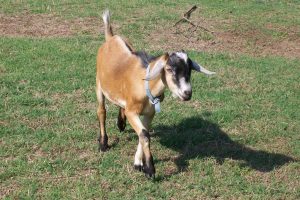 A relatively new breed, Kinder Goats were created not out of any urgent need but rather as a goat enthusiast’s experiment. Because of the wildly wonderful results, Kinder Goats began to be breed all over the country! Although Kinder Goats have a tendency to be boisterous and rough, they are not at all vicious, and bond lovingly with their owners.

They like to play and will seek out affection. Kinder Goats adapt very well to most management systems, but are ideal for smaller farmers who are looking for a house goat. They produce plenty of milk, have sweet personalities, and may be used as meat goats! Kinder Goats are generally small to medium sized, growing to around 26 inches at the withers with bucks being two inches taller.

Does usually weigh around 115 pounds, and bucks are a bit larger. Kinder Goats have deep chests and well sprung ribs. Their backs are long and level, and the entire goat has a well-proportioned look to it. Musculature is medium and bone structure is a little thick. Kinder Goats have very straight, wide set legs with nice feet. 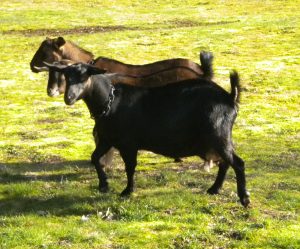 They are shorthaired and are available in an array of colors, as they were bred more for their reproductive ability than for their type. The ears of Kinder Goats are held horizontally and are of medium length. While Kinder Goats are born horned, they are usually dehorned, and must be dehorned in order to be shown. Bucks have medium sized, well-formed testicles.

Kinder does have rather large but well attached udders, with well-defined, easy to milk teats! The lactation period for a Kinder Goat is generally a little less than 305 days. In this time, it is not unusual for a Kinder Goat to produce 1,500 pounds of sweet, rich milk with around 100 pounds of butterfat! When slaughtered, carcass yield is also extremely high at 60 to 63 percent!

Kinder Goats were developed in 1987 by the Showalter family, who crossed a Nubian doe with a Pygmy buck! The Showalters were extremely impressed with these early Kinder Goats’ performance, and local goat enthusiasts were let in on the secret! Soon the Kinder Goat became nationally acclaimed and is now a recognized breed.

The Kinder Goat Breeders Society has been established to promote these wonderful dual-purpose goats. In show, your Kinder Goat will be disqualified if she is not dehorned. Any udder abnormalities will also disqualify her. At home, Kinder Goats need shelter from the elements as well as from predators like coyotes. 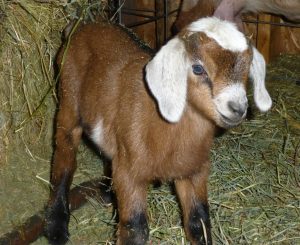 Placing a large dog or a donkey (who of course has been raised with goats and will not of itself be a threat to them) in their enclosure will eliminate predators! Kinder Goats need about five pounds of food per 100 pounds of body weight per day. When foraging, you may supplement their diets with hay or grain. Good supplements are goat feed concentrate or horse feed concentrate.

You may make your own food by mixing half a pound of corn, a quarter pound of oats, and a tenth of a pound of soybean oil meal. At all times, have a mineral block and fresh water available to them. Kinder Goats reach sexual maturity at less than two years of age, and generally give birth to twins or triplets.

They have easy lambings and rarely need assistance, and the lambing interval is less than a year in length. After a birth weight of about four and a half pounds, Kinder kids will gain around seven pounds each week! Kinder Goats have good maternal instincts!