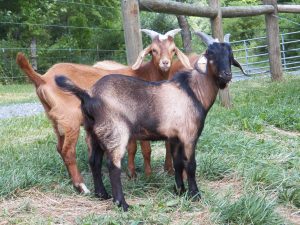 Kiko, a native word for meat animal, is the breed name for a newly developed meat goat in New Zealand. Given this breed’s traits, such an optimistic name is actually realistic!
Kiko Goats are extremely hardy and are low-input meat production animals.

On little or poor grazing, they can reproduce and form good musculature! Inquisitive and hardy by nature, Kiko Goats also have a natural resistant to parasites and harsh weather, which is extremely helpful. These goats are aggressive grazers who will spread out over a range and can finish a tough field with good results! 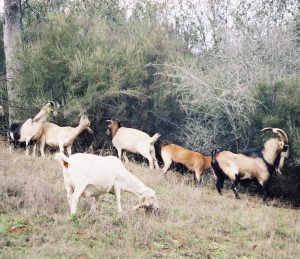 The coats are long, thick and wavy in winter, but during the summer months, Kikos shed some of the hair to expose a shorter, sleek coat. Kiko Goats produce lean but juicy and tender meat, with a carcass yield of 50 to 60 percent! Usually, Kiko Goats are slaughtered at 100 days of age, or 20 kilograms.

In the 1970’s, New Zealand began having a feral goat problem. Goats, which had gone wild over centuries of abandonment and escape, were overrunning the island’s fauna due to lack of predators! Programs began to determine how to rid New Zealand of the goats. Kiko Goats are a sort of corporate breed, developed by a farming consortium in New Zealand called Goatex Group.

They arise from feral New Zealand does who were crossed with European dairy and meat breeds like the Anglo-Nubian, British Toggenburg, and the Saanen. Kids to be bred into Kiko Goats were selected for their hardiness, their ability to reproduce in twins, and their fast growth rates.

By 1986, the herd became closed to outside breeding and the Kiko Goat was a recognized breed! In Australia, Kiko Goats are nicknamed the “Go anywhere, eat anything” goats because of their hardiness, adaptability and low maintenance requirements.  Kiko Goats need five to six parasite drenches in their first year, and two to three each year following. 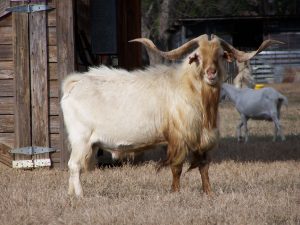 They do not need their hooves trimmed. Generally, about eight Kiko does and their kids can be run per approximately two and a half acres, along with 11 sheep. They can survive in fairly cool, wet climates as well as in arid, warm areas. Kiko Goats have high libidos and high fertility rates. Bucks reach sexual maturity at six months of age, and does may be bred at six to eight months.

They almost always have twins, and can breed from December through August. Kiko does do not need assistance in birthing. Kids are medium sized and extremely vigorous when born and Kiko does have very good maternal instincts.

They encourage their newborns to feed immediately and will defend their young from predators. Kiko Goats will even adopt foster kids on occasion, and they have plenty of milk to go around! Kiko kids grow extremely quickly and are very hardy.