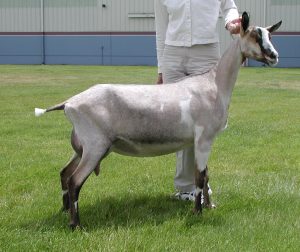 Comprising more than half of the dairy goats appraised in France, the French Alpine Goat is an extremely useful and productive varicolored animal! French Alpine Goats are hardy animals! They can tolerate a wide variety of climates and can subsist on even poor graze!

Perhaps one of the best reasons to keep French Alpine Goats is that they adapt with apparent ease to any management system, whether extensive or intensive! This makes them a bit easier to care for, since they can be placed into your dairy’s routine without implementing any trouble or drastic changes! 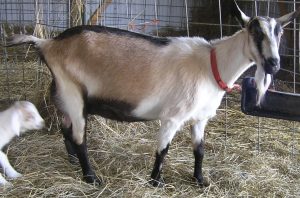 The range of colors can be anywhere from white to black, brown, red, gray, and any combination thereof. The hair is short and tends to look sleek. Generally, males have a stripe of longer hair along the back and a pronounced beard. French Alpine Goats have straight slightly dished noses, straight faces, and airplane-type, fine-textured ears.

Body types of French Alpine Goats are long and they appear tall! They seem to be fine boned and angular. Usually, a lactation period for a French Alpine Goat lasts about 275 days. 762 kilograms of milk are produced, on average, with 30.3 percent of that in protein and 34.6 percent fat.

French Alpine Goats were developed in the Alps and improved by the French, although you have probably already figured that out on your own! Around the region of Savoy, they were selected for size, production rate and general uniformity.

French Alpine Goats are so popular that today they make up 55 percent of the population of goats submitted to the milk control board for approval! French Alpine Goats were imported to America in 1922. In show, your French Alpine Goat will lose points if it has a Roman nose or any coloring or markings resembling the Toggenburg Goat breed. 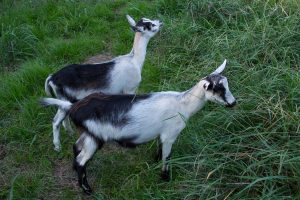 They are wonderful milkers and can support kids while milking for the dairy. Various breeding and artificial insemination programs are in place for the French Alpine breed. There are about 140,000 pure bred French Alpine Goats in France, and 30,000 of these have been artificially inseminated.