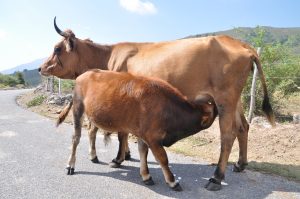 The Corsican Goat, known locally as the Corse, is a dairy goat, which is extremely hardy and unbelievably easy to care for! Corsican Goats are traditionally kept in pasture all year round! They are able to deal with rocky terrain, poor graze and weather exposure with no problems!

These inquisitive goats, well adapted to the Mediterranean mountain climate, have been living on the island of Corsica for years! Generally, Corsican Goats are quite small, and weigh between 30 and 40 kilograms in the wild. Most commercially bred Corsican Goat females weigh 48 kilograms, and males can be up to 75!

Whether feral or commercial, all Corsican Goats have long hair, which is available in a variety of colors. Most commonly, Corsican Goats are black, blond, yellow, white, gray, brown or red! The coats may be solid but are most often multicolored. The eyes are very alert, and the horns are fine, curving backward from the head. 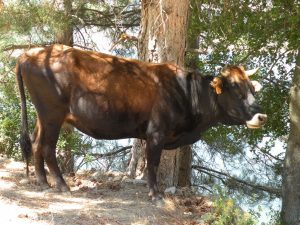 Corsican Goats have very prominent beards! Although they are generally kept for dairy goats, Corsican Goats have good quality meat and comprise a traditional cultural dish each Christmas for the inhabitants of the island of Corsica. The milk of Corsican Goats is extremely high in protein and fat percentages and typically 150 liters of milk in a 150-lactation period may be expected.

Corsican Goats were developed on the Isle of Corsica from local indigenous goats, which were improved in the 1970’s with French Alpine Goat genes. They are most commonly found in transhumant conditions in the rockier regions of Corsica. Corsican Goats have long been valued on the island for their dairy and meat production.

Each Christmas, Corsican Goat kids are a traditional Corsican specialty food. The milk is made into cheese, usually on the very farm where the goats are raised! The most common quality guaranteed labels are Niolu, Calenzana, Venaco, and Brocciu Appellation d’Origine Contrôlée. Corsican Goats do best when kept outdoors all year. 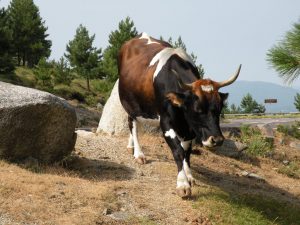 They thrive on fodder and grazing, and are extremely hardy. They have good feet and legs and have traditionally been driven from pasture to pasture, coming back to warmer lowlands in October! Corsican Goat milk is particularly valued in cheese production. Corsican Goats have low ages at sexual maturity and low kidding intervals! Usually litter sizes are small.

The mating season is longer than that of most goats, lasting from May to October. Most kids are dropped in November and stay with the herd until they are weaned in January. Most milking takes place in January after the kids are eating solid foods!