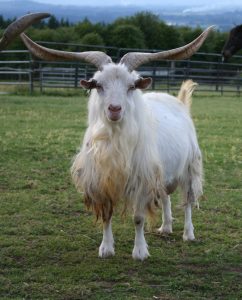 Quite possibly one of the most lucrative livestock breeds, most Cashmere Goats are actually feral! Through intensive breeding programs, a domestic base is slowly building! Cashmere Goats are hardy and may be exposed to the elements because of their thick coats, which also renders them insect-resistant! Even feral Cashmere Goats will calm down in captivity and adapt well to most management systems.

These coats, which make it possible for Cashmere Goats to be weather-proof, consist of a layer of guard hair and a layer of cashmere, which are closely intermixed. Generally, Cashmere Goats are shorn once each year and yield about two and a half pounds of fleece, 40 percent of which is cashmere fiber. The cashmere is coarse close to the neck, but it improves in quality toward the goat’s mid section.

Generally, the cashmere is crimped, 19 microns in diameter, solid and brown or white, but the guard hair comes in a variety of colors, which gives Cashmere Goats such varied coloration! The bodies of Cashmere goats are short and tend to be stocky and very well muscled in the hindquarters. The horns of Cashmere Goats are large and spread outward from the goat’s head, although many breeders dehorn the goats while young. 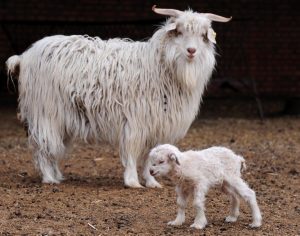 Cashmere Goats may also be used as meat goats and can fetch high prices for their carcasses. Usually, Cashmere Goats are sheared with a mechanical comb. It is a conventional shearing method similar to that used with sheep, or the “go down” method in which the goat’s head is restrained and most of the hair on its belly and legs is not cut. Cashmere Goats may be kept in enclosures of simple wire sheep fencing, as they do not jump! They love to test fences and make wonderful escape artists if they find even the smallest breach!

Cashmere Goats will need shelter after shearing if they live in a cold area. They need their feed trimmed, and may be susceptible to foot rot in damp climates. They are also susceptible to parasites, which can kill them. Generally, sheep parasite treatments work well on Cashmere Goats. Although Cashmere Goats are resistant to most dairy goat diseases, they are susceptible to tetanus, pneumonia, brucellosis, enterotoxemia, pinkeye, Caseous lymphadenitis and soremouth.

You should vaccinate your goats regularly for pulpy kidney, cheesy gland and tetanus. It is important to know the soil in your area so you can find out which mineral supplements your Cashmere Goats will need. They do quite well when pastured in summer and fall. Pregnant animals have different dietary requirements. Often you can induce breeding by giving females extra rations before introducing them to your bucks! Cashmere Goats reach sexual maturity at seven to nine months, or 25 kilograms in weight.

Generally, fifty percent of Cashmeres will have twin kids, and thirty percent have triplets. They have very fine udders and generally produce enough milk for twins. In the wild, Cashmere Goats breed from April to June, and ovulation is induced by the presence of male goats! Males reach sexual maturity at about five months of age. They will breed all year, though their semen count declines in the fall months. The scent of bucks in a neighboring pasture will induce ovulation in doe Cashmere Goats!

The breeding ratio is one to one and a half bucks per doe, and breeders usually simulate a breeding season at which they combine their goats for five weeks or two oestrous cycles. Pregnant Cashmere Goats need extra food in the third trimester and should not be sheared, as birth will make them shed naturally! The gestation period is about 150 days and kids have a high survival rate, although Cashmere Goats are susceptible to pregnancy toxemia.

Breeding programs may involve domesticated or feral Cashmere Goats. Feral females should not have physical defects and the color should be solid. Bucks should be more than two years of age and should be selected by the quality of their fleece. Like-fleeced animals should be bred together. A constant culling and selection process is required in order to maintain a good herd of Cashmere Goats!

Australia in particular has rigorous cashmere fiber requirements that goats must meet before they may be bred commercially. The fiber is inspected by a committee and must pass fiber length, live weight, and fiber diameter and down weight standards. Finer fibers are preferred.