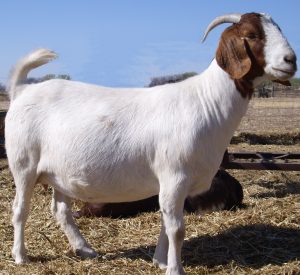 They have a low instance of internal parasites, are resistant to endemic diseases and are excellent breeders. Heavy muscling and rapid weight gain are very desirable traits found in the Boer Goat. Goats are great foragers and can exist in otherwise undesirable agricultural areas. A function of reproduction is the production of milk, however, the Boer Goat is not known for dairy as it is almost exclusively bred for meat.

Also it’s ability to produce cashmere has recently been discovered and is under investigation. According to breed standards, the Boer Goat should be white in color(a small number of red patches are allowable) with a red head and blaze. The skin should be pigmented, the legs should be short and well-fleshed, and the hindquarters and thighs should be well-developed. The Boer Goat has a large, Roman nose and should appear robust with good conformation. 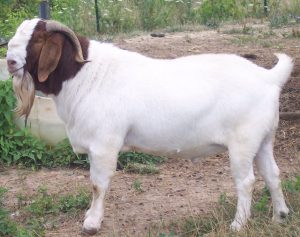 Boer goats originate in the southern regions of Africa and have long been a food source for indigenous peoples. Their origin is attributed to migrating Bantu tribes in Southern Africa. “Boer” refers to the descendants of Dutch immigrants, most of which were farmers and basically means “farmer’s goat”. During the early 1800’s in the Eastern Cape region of South Africa, goat farmers became more settled and the common Boer Goat evolved into a small short-haired goat with good proportions.

After a couple centuries of successful breeding for characteristics a distinct breed emerged known as the improved Boer Goat. The unimproved Boer is still the most common type found in rural areas and is a main source of food and is even used as a form of currency in tribal society. With the founding of the Boer Goat Breeder’s Association of South Africa, the breeding and selection of the Boer became regulated in July of 1959. Boer goats are prone to easily gain weight, it is very easy to overfeed them and cause terminal obesity, which has been a deadly factor in many excellent show animals. 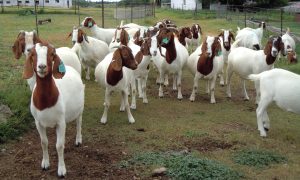 If the animal is fat and jiggling behind the elbow, or the base of the tail, it is too fat. The average weight gain for a Boer under one year is 10 pounds per month. Adult does may weigh from 150 to 220 pounds, and bucks may weigh from 250 to 350 pounds, on average. Bucks are fertile and able to breed at eight weeks of age. Does will reach puberty at six months of age and, because of extended breeding seasons in tropical and subtropical areas, can breed three times every two years.

Unless you are heavily feeding and supplementing, this is not recommended, and breeding the doe this many times can and will shorten the life span on the doe. Females are sexually mature at a young age and Boers have been bred to have high birth numbers, and triplets and quads are not unusual. The Boer Goats need no encouragement to breed. The mere introduction of males to females will bring the does into estrus in as little as eight days.