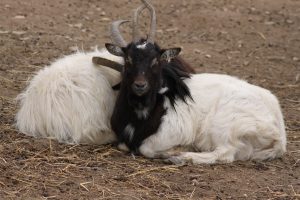 Can a goat be linked to a British family’s welfare? Apparently so, for legend has it that when the Bagot Goat becomes extinct, the Bagot family line will also end! Bagot Goats have been allowed to run wild for centuries. Although they may be tamed, they are quite nervous and become stressed very easily. Caution and patience must be used when raising Bagot Goats to prevent them from becoming vicious, nervous or generally antisocial!

The upside of the feral habits of Bagot Goats is their general hardiness and apparent immunity to harsh weather! They need a bit of shelter to keep them comfortable, but are not fussy eaters and are generally insect-resistant! At maturity, Bagot Goats remain quite small and at best may be called medium-sized! They have long hair and long horns, which often grow to two feet in length! 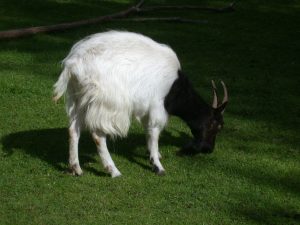 The horns curve and are generally dark in color. Bagot Goats are black and white in color. Usually, the front part of the body, including the head, is black, and the remainder of the goat is white. Often the hindquarters are decorated with black spots or marks and the face has a blaze. While this is acceptable in show, enthusiasts hope to breed out these marks and produce a pure definition between the black and white parts of the Bagot at the shoulder line.

Bagot Goats are agile and athletic, and extremely hardy. No one really knows where Bagot Goats came from. The only certain fact is that somehow they appeared on the Bagot estate, a gift from the King of England, in 1380! Most probably, Bagot Goats were brought into England as relatives of the Swiss Schvarshals Goat. Returning Crusaders probably brought the goats home with them, where they were kept in a royal park until they were given to the Bagots for hunting! 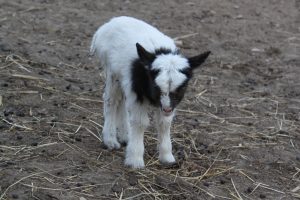 Today, Bagot Goats are apparently useless, not being bred commercially. They may be used for their meat and are certainly an asset to genetic diversity and national history! Lady Bagot realized the goats’ significance, and donated the goats remaining on her estate to the Bagot Society. The goats are growing in number and today, there are about 200 nannies registered with the society! There is a Bagot family legend stating that when the Bagot Goat is extinct, the Bagot family line will follow!

The coloration of Bagot Goats does not always breed true, and the breed society is trying to improve its standard with the growing number of Bagot Goats. They intend to produce a solid, two-toned goat. Bagots tend to have short tempers and be a little wild, so it is important to socialize them patiently and early on in their lives! Bagot Goats have been bred up in many areas through crossbreeding, which, rather than improving the breed, actually pushed it very close to extinction! Today, if you intend to purchase a Bagot Goat for breeding or show, verify that it is indeed a purebred animal!