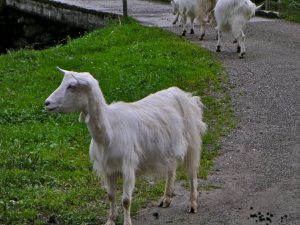 Known in its native Switzerland as the Appenzellerziege, the Appenzell Goat is an endangered dairy breed who is extremely useful and worth saving! Appenzell Goats are very useful! They are commonly milked, but may also be used for meat or kept as pets! These goats do best when they are allowed to pasture for the majority of the year.

They should, however, be kept stabled or indoors for the coldest two to six months of the year. When stabled, they may be fed fodder, but when pastured, Appenzell Goats will flourish on the simple graze they can find. At maturity, male Appenzell Goats stand at about 80 centimeters at the withers, and females are about five centimeters shorter. In general, the goats are built broadly rather than tall, and usually males weigh 70 kilograms! 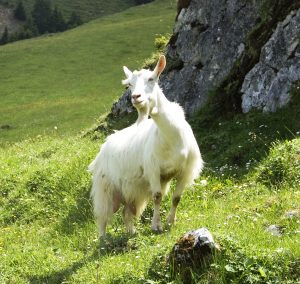 Females weigh about 50 kilograms. Appenzell Goats have long white hair. The hair is particularly long over the back and hindquarters. The body appears well proportioned and well muscled, and Appenzell Goats have a general appearance of compact power! They do not have horns, which makes them a bit easier to handle. Their lactations last around 270 days, and Appenzell Goats generally produce about 750 kilograms of milk per lactation. Of this, 2.9% is fat and 2.7% is protein! Also, occasionally used for their meat, the Appenzell’s muscles are well developed and their meat is quite lean.

Typically, Appenzell Goats are found in Switzerland, especially in the cantons of Toggenburg or St. Gallen, and Appenzell, from whence it got its name! They are probably improved versions of indigenous goats. Since 1970, there has been occasional crossing with the Saanen; while they are useful dairy goats, Appenzells are also valued cross breeders. In fact, the Zurich Goat was developed from this breed! Appenzell Goats were nearly extinct at one point, and today they are making a comeback through various breeding and artificial insemination programs. 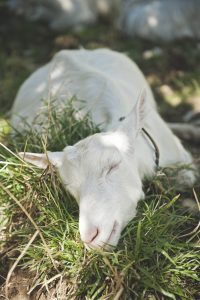 There are about 800 animals registered today with the herd book, which was established in 1900. Although Appenzell Goats were nearly decimated by the deadly CAE-Virus, today the breed is slowly rebuilding its numbers. Breeders claim that the breed is now practically CAE-Virus free. Compared to popular local breeds like the Saanen Goat, the Appenzell Goat has an average breeding rate, litter size and equal age at sexual maturity. Although they produce plenty of milk for their litters, they are a bit lower in milk production than the Saanen, and their kids gain a bit more slowly than do the Saanens.