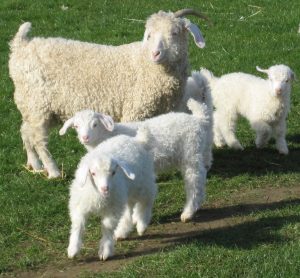 The Angora goat is a small breed of goat, which originated in Asia Minor in the district of Angora, which has since been imported to South Africa, New Zealand, Turkey and the United States. The Angora goat is best known for the fine quality mohair, a fiber similar, yet in some ways superior to wool, that it produces. Angora goats do best in a hot, arid climate.

Their tolerance to extreme temperatures, hot or cold, is not as good as some other breeds making them susceptible to pneumonia. They are excellent foragers and can survive on land that may be agriculturally unsuitable otherwise. A dominance order does exist among the Angora goat but it is quite subtle and usually has to do with disputes over food.

The Angora goat is small when compared to other goats or sheep. Both males and females have horns and the males have a pronounced spiral to the horn sometimes extending two or more feet in length. The females have much shorter horns (nine to ten inches) with only a slight tendency to spiral. Both have heavy, drooping ears. 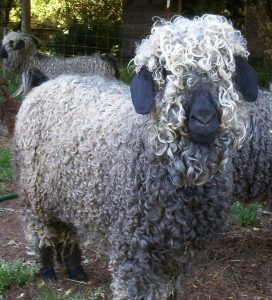 Angora goats vary in size-males range from 180 to 225 lbs. At maturity, (5 years) and females weigh between 70 pounds and 120 pounds. The body will be similar to that of a sheep with less developed mutton characteristics. Angora goats are classified into two types; flat lock hair and ringlet. The flat hair (B-type) is wavy and not as fine as the ringlet type (C-type) which represents the finest mohair produced The history of the Angora goat goes back to ancient times. There is mention of the use of mohair by Moses and it is actually believed to date back to pre-biblical antiquity.

In an effort to establish a mohair industry in England, a pair of Angora goats was imported by Charles V in the 16th century. It was unsuccessful, however. In 1765, Spain tried also to import the Angora and again twenty years later France imported a large number of the breed. They were also unsuccessful. South Africa finally succeeded where the others had failed and the United States soon followed suit. They are now the leading manufacturers of mohair along with Turkey. 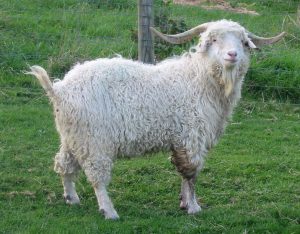 Angora goats are among the most delicate of domesticated livestock and are more likely to suffer from internal parasites than others. Special care must be taken to keep newly shorn goats out of any adverse weather. The breeding season of the Angora goat is in the fall. The female’s fertility cycle is about 20 days with a gestation period of around 5 months. Drastic rises in temperature can compromise the fertility of the male Angora.