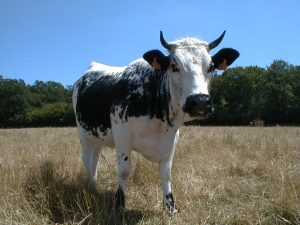 This sweet, amiable nature is the result of their being used as draft animals for centuries. Vosges Cattle tend to be extremely low-maintenance and hardy, surviving in mountain pastures and grazing during the summer on whatever they can find. The breed is known for its vigor and hardiness. A mature Vosges Bull stands from 135 to 140 centimeters at the withers.

Cows are generally about 125 to 135 centimeters tall. Bulls weigh about 800 kilograms and cows weigh 200 kilograms less. Vosges Cattle generally have gray faces and are marked with a dark muzzle and dark rings framing the eyes. The body is generally black with a white dorsal stripe which, like all other white areas, is sharply defined.

The underside is also white, as is the tail and the legs downward from the carpal and tarsal joints. Annually, Vosges Cattle can produce about 3,300 kilograms of milk! It is about 3.75 percent fat and 3.33 percent protein. They tend to be very robust and long-lived and will continue to produce milk up into their teen years!

Originating in the area of Vosges, France, the breed was originally used as draft animals. They were brought into the Alsace area by Swedish soldiers during the Thirty Years’ War at the beginning of the 1600’s. These Jemtlander cattle mixed with local herds, and at the beginning of the 1800’s, Lothringen Cattle blood was added. A herd book was established in 1928. 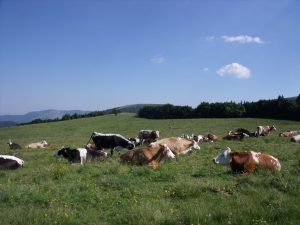 Around this period, Vosges Cattle were extremely popular but by 1976 there were less than 3,000 cows remaining. Today, there are about 9,000. In 1971, semen from Telemark bulls was mixed into the Vosges line, but today a purity and preservation scheme is underway to preserve the Vosges breed. Vosges Cattle do best when left to pasture in the summer and stabled in the winter.

They are very hardy and can walk long distances. They eat mostly fodder grown in the Vosges area. Muester cheese is the most well known product of Vosges milk. Vosges Cattle are known for their fertility and for their ease in calving. They are about average in their calving interval rate. Today, only about 80 percent of existing Vosges cows are used for breeding.