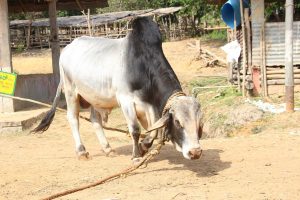 Tharparkar Cattle, also known as Thari Cattle in their native country, are rather adorable appearing animals who have been used as dairy cattle for centuries! Traditionally, Tharparkar Cattle are kept by breeders in herds ranging from 50 to 300 animals! They have rather special attention requirements.

When handled daily, Tharparkar Cattle tend to be very docile and forgiving, but when left to themselves, these animals may become temperamental, wild and even vicious! They do very well under poor conditions and on sparse, arid land, can produce up to 1,135 kilograms of milk per lactation! They are disease and weather resistant and have a very low susceptibility to parasites.

Also known as White or Grey Sindhi Cattle, at maturity, Tharparkar Cattle stand about 138 centimeters at the shoulder. They generally weigh 408 kilograms, with bulls being larger than cows. Their bodies tend to be very compact and their legs short but very strong, and these cattle have long lop ears. Tharparkar Cattle have slightly convex faces and a broad forehead topped by medium sized outward and upward curving horns. 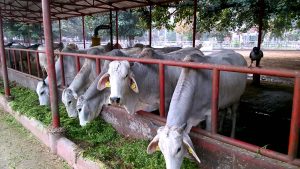 Tharparkar Cattle have a slightly worried appearance because they have wrinkles between their eyes! The eyes are bright and framed with long, black lashes and black eyelids. In males, the hump is very well developed, as is the dewlap. Males have a semi-pendulous sheath of medium length and females have a well-developed naval flap. The skin is black, although the hair is grayish silver to silvery white in color.

Usually, the skin is yellow on the ears, dewlap, belly and udder! Immature animals often have a line of very light white or gray running dorsally across the body. Tharparkar Cattle have athletic shoulders and their hooves are extremely hard and black. They have delicate tails with a black tail switch. Tharparkar are native to the Tharparkar or Cutch areas of the Indian province Sind, and as a result are sometimes known as Cutchi Cattle.

They represent blood from Kankrej, Gir, Nellore and Red Sindhi breeds! Traditionally, Tharparkar as used as dairy cattle and kept in large herds by breeders called Maldars. Tharparkar Cattle gained popularity when, in World War I, troops observed their incredible performance under poor conditions. Tharparkar Cattle are probably resistant to a few tropical diseases and are not susceptible to outward-turned hooves. 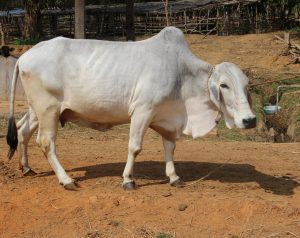 They thrive in any conditions and, when properly managed and well fed, average about 1,980 kilograms of milk per lactation. It is recommended that, when stabled, 40 square feet should be allotted per bull, 30 per heifer, and 20 per calf. Tharparkar Cattle should be fed a mix of 20 to 25 kilograms of green fodder a day, in addition to five to six kilograms of dry fodder and one kilogram of concentrated feed.

Lactating females should have this adjusted to allow one kilogram of concentrate per three liters of milk produced! Tharparkar Cattle must be regularly and patiently handled or they will become unmanageable and wild. Tharparkar Cattle produce ample milk for their young. Bulls are known to be very virile. Immature animals have a light gray or white dorsal stripe.