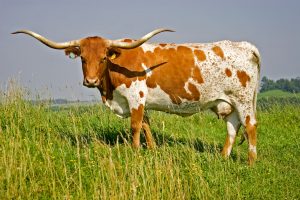 The Texas Longhorn was the cornerstone of American cowboy culture and is once again regaining popularity in the modern demand for new genetic material that can be used to improve domestic cattle. While the Texas Longhorn’s membership may not be as large as more popular cattle such as the Angus, it is growing at a very fast rate.

Longhorns are very common, as registered and non-registered cattle. Texas Longhorn Cattle are true pioneers, able to survive in very poor conditions. In ranges where other cattle could not survive, the Texas Longhorn is able to find enough for grazing. These cattle are disease and drought resistant and can survive in extreme temperatures.

If necessary, they can fight off large predators in the wild! Texas Longhorns also have a reputation for being a bit temperamental and difficult to handle. They adapt well to most extensive management systems. With a small, slim build, Texas Longhorn Cattle stand at about 130 centimeters at the shoulders, cows being about ten centimeters shorter. 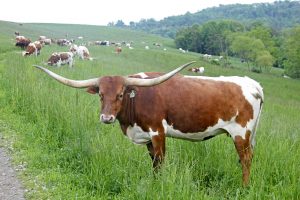 Bulls weigh about 600 kilograms, and cows range from 350 to 400 kilograms. As the name would imply, Texas Longhorn Cattle have a huge horn-spread. Especially in older bulls, the thin horns curve outward to impressive lengths. As far as color, Texas Longhorns have no breed standard. Although most often they are gray, white, black or brown, they may be brindled, spotted, varicolored or patched!

Their legs are long and their muscling light. In an era where lean meat is popular, Texas Longhorns fit the bill with incredibly lean beef. The meat is dry and good for specialty use! Texas Longhorns are especially valued as cross-breeders, able to shake up the genetic makeup of uniform lines of cattle. They impart fertility and general hardiness, including climactic tolerance and disease resistance.

Over 500 years ago, the descendents of Texas Longhorn Cattle were brought into North America by Spanish explorers. Natural selection ran its course for almost 400 years, producing lean survivors who ran wild over the southwest United States. After the American Civil War and the depletion of naturally occurring Great Plains Buffalo, the Texas Longhorn became a valuable economic source.

Cattle ranchers populated the empty plains and the northern part of America with Texas Longhorns, breeding them in earnest and bringing the breed to the forefront of the beef industry. By 1900, the breed was completely refined, although during the harsh blizzards and droughts of the late 1800’s, the Texas Longhorn was killed off in incredible numbers along with all other American ranch cattle in addition to being nearly obscured through crossbreeding. 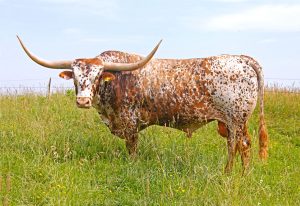 The population has risen to about 8,000 cattle. Texas Longhorn Cattle are useful in crossbreeding and may be served to heifers on their first breeding. Their meat is used as specialty meat and they are useful for finishing off browse, which other cattle cannot handle. They are disease and parasite resistant in addition to their ability to survive drought and heat.

Texas Longhorn Cattle may be temperamental and do well when left to pasture. They are able to fend for themselves and ward off even large predators. Texas Longhorn Cattle have extremely easy calvings and are quite fertile. Because of their smaller size, it is safe to crossbreed them to heifers even on their first breeding.