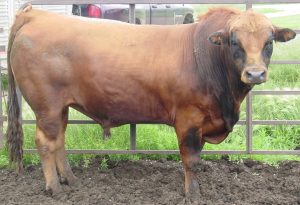 Tarentaise Cattle, a little-known breed in many countries, are extremely useful! Having wonderful beef and milk producing qualities mixed with a generally hardiness, it is very easy to see why these cattle are a precious secret anyone would want to keep! Living in higher pastureland than any other cattle, Tarentaise are hardy survivors, living on poor and sparse forage in terrible cold.

They are athletic in rocky terrain and surprisingly adaptable to hot climates! Docile and easy to manage in most systems, Tarentaise Cattle are useful for both meat and dairy farmers! A full-grown Tarentaise bull generally stands four and a half feet at the shoulders and weighs 2,100 pounds.

Cows are shorter, standing at four and a quarter feet and weigh 1,200 pounds. These cattle have black pigmented skin, and are yellow to red in color. Generally, Tarentaise Cattle have a dorsal stripe or finchback of lighter colored hairs! This breed has black noses, and usually the area around the muzzle and the lower legs are lighter in coloration than the rest of their bodies. 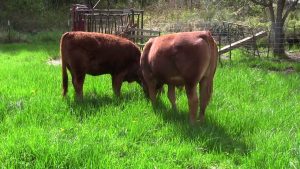 Tarentaise have long bodies and very thick muscles. Though their bodies are nicely conformed for dairy use, this natural muscling is proving that the Tarentaise is more than suitable as a beef breed. Originating in the high mountains of Eastern France, Tarentaise Cattle are thought to have descended from native cattle living near the Isere River.

They receive their name from the Alpine Tarentaise Valley, from whence they come. Over the last hundred years, there has been very little mixing of Tarentaise blood with other cattle. Tarentaise Cattle were officially recognized as a distinct breed in 1859. In 1888, a herd book was established, but was vastly revised following World War II. 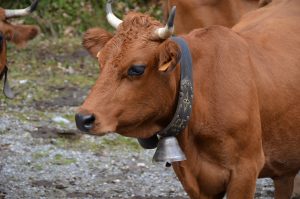 In the early 1900’s, Tarentaise Cattle began to be exported to the hot regions of North Africa, where their performance surprised everyone! Americans and Canadians discovered the breed in the 1972, using the calf Alpin in Canada to crossbreed with local cattle. The idea was to produce cattle with all the Tarentaise’s vigor in addition to their great dairy qualities and easy breeding and calving ability.

Tarentaise Cattle need little, if any, special care. They are exceptionally hardy and are adaptable to most management systems. They have wonderful qualities as both beef and dairy cattle. Tarentaise Cattle have remarkably easy calvings and are very pure genetically. They are highly fertile and are a favorite as crossbreeders.