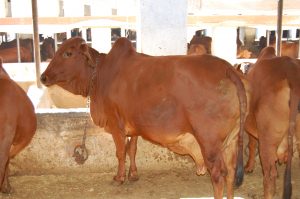 Red Sindhi Cattle, a very popular dairy breed, are well known throughout the southern hemisphere. They are amazingly hardy and their production is equally incredible! Although Red Sindhi Cattle may be a bit difficult to control, with careful attention they will tame down nicely. They are not particularly wild or aggressive, but more often get into trouble due to their curious and sometimes mischievous natures!

Red Sindhi Cattle are very hardy and absolutely heat resistant. They are intelligent and generally docile. As their name would indicate, Red Sindhi Cattle are red! They vary from a deep mahogany brown to a washed out, almost yellow color. Bulls tend to be darker in color than cows, and at maturity can have heads, tails and feet that are nearly black!

A mature Red Sindhi Bull stands about 134 centimeters at the withers and weighs about 420 kilograms. Females weigh 340 kilograms and stand at about 116 centimeters tall. Conditions under which these cattle are raised will vary their measurements. Red Sindhi Cattle have a prominent dewlap and a prominent hump. They are well fleshed and have especially well muscled hindquarters.

Their medium-long ears droop downward, and their horns turn out and up, generally growing to about seven centimeters in length. The rumps of Red Sindhi Cattle slope gently, and the ribs tend to be nicely sprung. Their long tails are thin and clean. Resistant to pests like worms, buffalo fly and ticks, Red Sindhi Cattle also will almost never contract pink eye or eye cancer. With ideal conditions, Red Sindhi Cattle can produce up to 3,400 kilograms of milk!

Usually, their average is 1,700 kilograms after suckling a calf. Red Sindhi Cattle produce superior veal and the carcass yield is quite high, with little back fat. Developed in India in the Sind province, from whence their name comes, Red Sindhi Cattle are also known as Sindhi Cattle, Red Karachi Cattle, or Malir Cattle. In 1954, the first Red Sindhi Cattle arrived in Australia as a gift from the Pakistani government, and since then have become wildly popular as a triple purpose breed: dairy use, beef use and crossbreeding use! 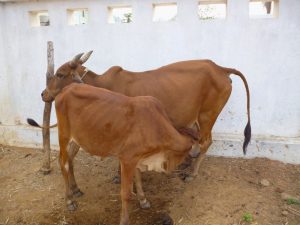 Today, they remain the major source of dairy products in Pakistan, and because of their superior hardiness and low maintenance requirements, are favorites of farmers worldwide. Red Sindhi Cattle lactate according to instinct, and most will only let down their milk if they have a suckling calf or a calf nearby. Australian breeders have solved this problem by using first generation Red Sindhi/Holstein-Fresian cross cows, who were bred to Red Sindhi bulls.

The resulting cows had lost this milk-withholding instinct. Red Sindhi Cattle are also prone to having “bottle teats”, or teats which are so large that the calf is unable to suckle. In such cases, it is important to teach the calf to suckle from the smallest teat by “milking it out”, and when the calf has grown it will be able to use the others.

Red Sindhi bulls begin breeding at about 15 months of age. These cattle have a careful method of breeding: bulls will observe their cows until the cows are prime for breeding. The bull will breed once and then leave the cow alone. Even under harsh climates or conditions, or with poor feed, cows will continue to cycle and produce healthy calves. Generally, they calve very easily.

Calves generally weigh about 20 kilograms and fatten quickly. Sometimes bottle teat is a problem (see Special Care Information). Red Sindhi Cattle are valued as cross breeding bulls because of their incredible hardiness and heat resistance, which are passed on to beef cattle crosses.