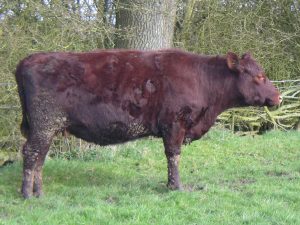 Steady, dependable, and proven many times over to be valuable beef and milch cows, Red Poll Cattle are a breed of cattle that are worth getting to know! Red Poll Cattle have been uniform as a breed for centuries. They have sweet, gentle dispositions and are quite calm. This makes them very easy to handle and thus a good choice for farmers with smaller plots.

Red Poll Cattle adapt well to most management systems and when bred, produce offspring, which are predictable in appearance and personality. They are very hardy and can resist both drought and cold! A mature Red Poll bull stands about 140 centimeters tall at the shoulder, while cows stand at about 127 centimeters. Bulls weigh around 838 kilograms and cows are lighter at 586 kilograms. Red Poll Cattle have deep, barrel shaped bodies with short, thin legs.

Occasionally, a small dewlap is present or the face is mottled with white. These cattle are naturally polled, making them easier to handle than most breeds. As their name implies, they are red, ranging from a dark cherry color to a lighter golden-red. Red Poll Cattle finish as a beef breed a full year or two before most other breeds. They are known for their extremely high quality meat as well as for their general hardiness and efficient feed finishing.

They fatten well but have high carcass yields. Although Red Poll Cattle were once renowned as milkers, the focus has been placed lately on their beef qualities. The milk remains of high quality, however. Red Poll Cattle are also highly valued as cross breeders. Because they are genetically dissimilar from many other breeds, they are able to produce offspring with their incredible vigorousness in other breeds. 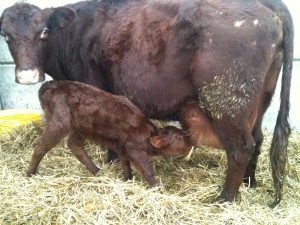 Probably arising from a cross between Norfolk and Suffolk Cattle, the Red Poll is most likely genetically similar to small red hornless cattle brought to Great Britain by the Roman invasions. It is believed that Galloway and Devon Cattle were also crossed into the Red Poll pedigree. They were highly valued as dual-purpose cattle and were praised in literature as early as 1782. The herd book was established in 1874.

G.P. Taber was the first to bring Red Poll Cattle to the United States in 1873. From the United States, Re Poll Cattle spread into Canada. In North America, the breeding emphasis has been on the beef qualities of the Red Poll. In the 1920’s, Red Poll blood was used to develop the Senepol breed of cattle! Red Poll Cattle do best in management systems in which they are stationary and stabled for the coldest months of the year.

They are, however, very hardy and can deal with rather cold temperatures. They have very little fat on their carcasses when butchered. Red Poll Cattle are well known for their good maternal instincts and milk production. They have easy calvings and are very fertile. Once born, Red Poll calves have rapid rates of weight gain!