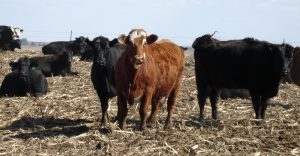 Which popular Chinese breed of cattle is beginning to rival world-famous beef-producing breeds? It is the Qinchuan breed of cattle, known for its extraordinary meat! Qinchuan Cattle have mainly been used as draft animals and work hard. They are muscular and can pull very heavy loads.

Qinchuan Cattle adapt easily to many varieties of management systems. They are fairly easy to handle after years of agricultural draft use. Today, hardy Qinchuan Cattle are becoming less important for tractive power and more important as beef cattle, and rather than being kept predominantly by small farmers, management systems are changing to see commercial Qinchuan holdings.

This breed does have horns, which are short and generally quite thick in contrast to the rather thin neck. Qinchuan Cattle have well developed dewlaps. Their humps are located high and are quite wide in bulls. As tractive power providers, bulls can pull around 475 kilograms and cows can haul around 280 kilograms.

When used for beef, the carcass yield of Qinchuan Cattle is around 58 to 61 percent at 18 months of age or 52 percent at two years of age. The meat is tender, flavorful and well marbled though lean. In a 210-day lactation period, Qinchuan cows produce around 716 kilograms of milk. Four point seven percent is comprised of fat, and protein makes up around four percent of this milk.

As their name would imply, Qinchuan Cattle are from the Qinchuan plains of China! They are also known as Ch’in-ch’uan, Chinchuan’, Chinchwan, Tsinchuan or Tsin’chun Cattle. Cattle have been selectively bred in Qinchuan’s records since 800 BC! Gradually, selected for draft power and beef type, the Qinchuan breed evolved.

They remain the main source of tractive power in their native grain-producing region, the Guanzhong Plain. Today, however, it has been recognized that the beef qualities of Qinchuan Cattle are extraordinary. When kept under more favorable intensive conditions, their meat production rivals that of traditional beef-producing breeds.

Throughout China’s Shaanxi province, there are more than 700,000 Qinchuan Cattle! Qinchuan Cattle evolved in a temperate region and probably would not flourish in extreme temperatures. They do very well in more intensive management systems, where record heights, weights and beef production yields have been recorded. Qinchuan Cattle with underdeveloped hindquarters and small or wizened thigh muscles are not uncommon.

Qinchuan Cattle have been selectively bred for years. Today, experimental crosses are being made with Danish Red and Red Shorthorn Cattle to produce better milkers and better beef type Qinchuan Cattle. They are known for reaching sexual maturity at an early age and have daily gains on the feed lot of almost one-kilogram!