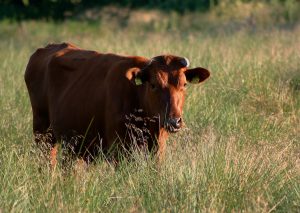 They adapt very well to most management systems and because of their productive efficiency and sweet personalities are ideal for farmers with small plots. Polish Red Cattle may also be used for draft purpose because of their handling ease. A mature Polish Red bull usually stands about 135 centimeters at the shoulder and weighs 700 to 900 kilograms.

A cow stands ten centimeters less and usually weighs 400 to 550 kilograms. These cattle have medium sized frames with a broad head, level back, and sloping pelvis. As the name would imply, Polish Red Cattle are red! The colors range from rich mahogany red to a bright cherry color. The neck and head, legs, and belly are usually a shade darker than the rest of the cow!

Polish Red Cattle are adorned with short horns, which curve up and forward in cows! Their udders are small and are covered in light, fine hair. On average, a cow’s expected milk yield is 2,700 kilograms with three and a half percent of that in protein and over four percent in butter fat. The carcass yield is good and the Polish Red has a moderately muscled body type.

Polish Red Cattle probably originated from red cattle strains imported to Poland from Denmark, Germany, and Sweden! The herd book was established in 1895, as it was clear that these cattle could be used for milk, meat, and draft purposes and were extremely robust, even-tempered and undemanding. East Frisian, Shorthorn, Danish Red, and Angeln blood were all imported into the Polish Red line in the early and mid 20th century, vastly diluting the breed’s gene pool and endangering it. 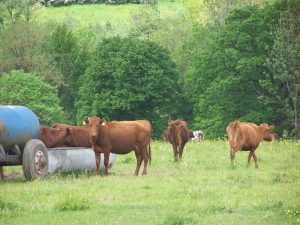 Preservation and artificial insemination programs are in place to preserve the dwindling population of Polish Red Cattle. These cattle are very fertile, but do not reach sexual maturity until they are three years of age. Calf mortality rates are very low and milk production is good. Polish Red cows have high calving rates and very easy calvings. As crossbreeders, they impart good milk production and extreme vitality.