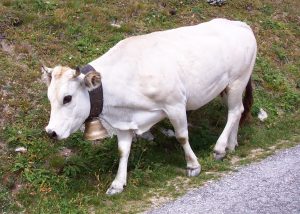 With its extraordinary genetic traits for “double muscling”, the Piedmontese breed of cattle is quickly gaining attention and popularity from scientists and breeders alike! Piedmontese Cattle are quite hardy and have inhabited the cool mountainous regions of northwest Italy for centuries.

They have been domesticated for more than one hundred years and are quite docile and fairly easy to manage under many commercial systems. Piedmontese do best under housed, stationary conditions. Piedmontese Cattle, when mature, stand at about 150 centimeters in height and weigh 950 kilograms. Females are generally smaller, with 145 centimeters of height and 600 kilograms of weight. 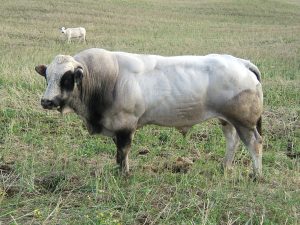 Piedmontese Cattle are a blue-gray color, although they range from brownish gray to nearly white! They are adorned with a black tail switch and black eyelashes and are not polled. Perhaps the most remarkable aspect of these beef cattle is that they carry double copies of a gene, which allows them to develop extremely heavy muscles, sometimes called double muscling or DM.

This not only changes the texture and makeup of the beef produced, but it allows for much more beef and much less fat on the carcass than with other breeds of cattle. This unique Piedmontese gene is known as the myostatin allele. When used in cross breeding, calves which inherit just one copy of the Piedmontese myostatin gene will produce seven percent more beef with 14 percent less fat than industry standard cattle! 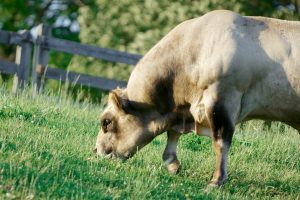 Originating in Piedmont or Northwest Italy, Piedmontese are a mix of the local, prehistoric cattle and the Zebu, which migrated into the area from what is now Pakistan and could not cross the Alps. The cross, which resulted over the next 25,000 years, was the Piedmontese! Recognized for its profitable and amazing DM traits, in 1886, breeders began seriously producing pure Piedmontese Cattle, and in 1887, the herd book was started.

Today, the Piedmontese and its incredible genetic makeup have attracted the attention of breeders globally! Piedmontese Cattle produce beef, which is much higher in protein than many other types of cattle. They are quite large and thick and require sheltered management systems.

Piedmontese have a very low milk yield and take longer than most cattle to reach sexual maturity. Nevertheless, the bulls are extremely useful in cross breeding, which imparts their special myostatin allele to herds of cattle that previously had standard genetic makeup. This raises their productivity!