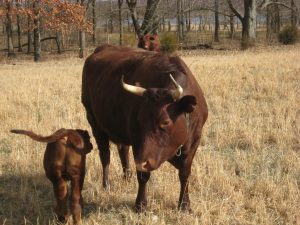 These cattle are highly adaptable to most management systems, and can be taught simple commands, making them extremely easy to handle. Even bulls are known for their docility when they are raised with patience and kindness! Milking Devon Cattle can survive in harsh weather and on very poor or scarce fodder, and their general vigorousness makes them quite easy to care for!

At maturity, Milking Devon bulls usually weigh from 1,700 to 2,200 pounds! Cows are generally 950 to 1,300 pounds, and Milking Devons have medium sized frames. They are quite sturdy, with short blunt legs and deep, strong chests. They are usually colored red, ranging from light golden red to deeper mahogany colors. 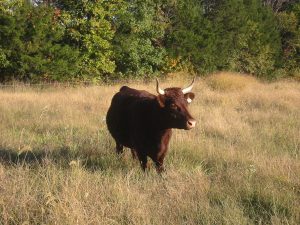 In summer, the hair is shiny and sleek, quite short, but in the winter, it grows longer, shaggy and curly! Often, Milking Devon Cattle will have white tail switches, scrotums, or udders. The udders are of lovely dairy conformation and are carried high and tight. Milking Devon Cattle do have curved, medium-length horns, which are light in color but grow darker toward the tips. Like all Devon Cattle, Milking Devons may be used as draft and beef animals as well as dairy cows.

The milk of Milking Devons is ideal for cream and cheese, with high fat content. They are hardy, healthy, long-lived, almost insect proof and weather-tolerant! Milking Devons are an ancient breed of cattle and it is believed that they have remained unchanged in hundreds of years. This is part of the reason why the Milking Devon Association’s herd-book is closed. Milking Devon Cattle arrived in North America at 1623, descended from a shipment of Devon Cattle to Plymouth Colony!

They were valued for their draft power, but also for their general hardiness and undemanding natures. Their beef and dairy qualities were recognized and used. Recently, the trend has shifted toward specialization, and Devon Cattle began to be bred as beef cattle around 1952. Some farmers disagreed; keeping their Devon Cattle with dairy conformations, and in 1978, a new registry for Devon Cattle was formed, which allows Devon Cattle to be a triple purpose breed. 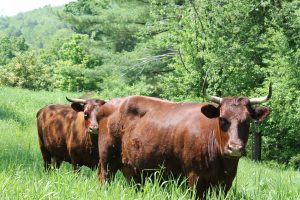 Today Milking Devon Cattle remain highly productive and valuable as low-input dairy and beef producers! They are valued especially among smallholdings farmers, as they make the ideal house cow because of their dairy output, smaller size and manageability! They are listed as critically rare by The American Livestock Breeds Conservancy there are apparently less than 600 cows worldwide.

Today the Milking Devon is rarely seen outside of North America, they are extinct in their native Devonshire in England. Milking Devon Cattle do very well with most intensive or semi-intensive management systems. They are trainable and docile when raised with gentleness.