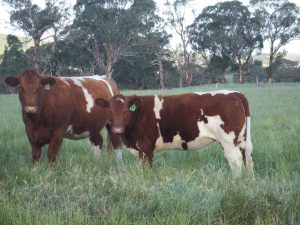 The gentle giant of the cattle world, Maine-Anjou Cattle are truly useful to farmers on a global scale, and are surprisingly easy to handle despite their large size! Maine-Anjou Cattle are quite undemanding and are used for dairy and meat purposes. They are valued on small holdings because they fatten quickly on little grass and, due to their size, can provide enough milk for a household while suckling a calf! 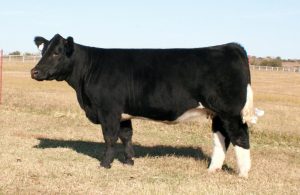 Generally, it is the belly, head, tail, and rear legs that are white, but these markings are often found in other places as well. Maine-Anjou Cattle are heavily muscled and massively built. They are a dual-purpose breed valued for both their beef and milch qualities! Originating in northwestern France from a cross between Mancelle and Durham Cattle, the Maine-Anjou was known as the Durham-Mancelle until its breeding society was formed in 1909.

At this point, the name Maine-Anjou became common due to the breed’s high occurrence in the lands between the Maine and Anjou rivers. In 1969, the Maine-Anjou came to Canada and later that year arrived in the United State via semen. The American Maine-Anjou Association was formed in 1976 and the breed continues to grow in popularity globally.Most commonly, Maine-Anjou Cattle were kept by small farmers in divided herds: one half for milk, the other to fatten and sell for beef.

Maine-Anjou Cattle are still valuable in both capacities, and a single cow can serve as a wet nurse for two calves! They are highly efficient at grass conversion! Maine-Anjou Cattle make good mothers or wet nurses because of their good milk producing qualities and gentle dispositions. Calves grow quickly and may be sold for beef. Maine-Anjou bulls are highly valued as terminal sires used in cross breeding.