Which Zebu breed is the heaviest of all? It is the Kankrej, an extremely athletic, useful dairy and draft animal popular in India and the Americas, as well as in many countries worldwide! Extremely hardy and powerful, Kankrej or Guzerat Cattle are highly valued for doing very quick, moderately heavy draft work. Kankrej Cattle are athletic and willing workers.

They are heat and tick resistant, and are not very susceptible to disease. Kankrej Cattle are usually the heaviest of the Zebu breeds and have a prominent hump, which may not be very firm. Their chests are broad and deep, and their backs tend to be quite level. Kankrej Cattle have loose, thick skin covered in short hair. The skin itself is darkly pigmented, and the hair is usually various shades of gray or black.

Silver grays to dark charcoal gray are all quite common. The tail switch is always black. The hump and fore and hindquarters are usually a shade darker than the rest of the cow, particularly in male Kankrej Cattle. Atop a short face and slightly upturned nose, this breed has very broad foreheads, which are often dished. The skin continues farther up the horns than in most breeds, and the horns themselves are lyre shaped.

Kankrej Cattle have large, floppy ears that are generally open, dissipating heat. The dewlap and sheaths are droopy, though the dewlap is often thin. Kankrej Cattle have very good, strong, athletic legs and feet. This breed is often described as having a “dignified” or “stately” appearance. They are good milkers and under poor, undeveloped conditions, a Kankrej cow can produce about 1,400 kilograms of milk each year. 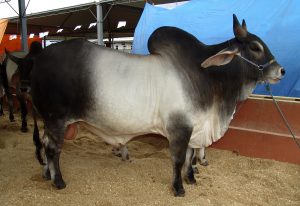 Kankrej Cattle receive their name from the area of India in which they were developed. They are also known as Bannai, Nagar, Talabda, Vaghiyar or Vadhiyar Cattle. Wadhiar, Wadhir, Wadial, Wagad, and Waged are also common names, being derived from the names of traditional Kankrej herdsmen. In India, Kankrej Cattle are often raised under drought conditions. They have become extremely popular in hot climates like those of Brazil, where they are known as Guzerat Cattle.

Kankrej Cattle generally bear their first calves around 45 to 47 months of age. The calving interval is usually between 486 to 510 days. Kankrej calves are born with red or rust coloration on their polls, but this tends to disappear once the calves reach six to nine months of age.