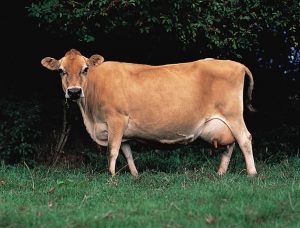 The modern Jersey is one of the most popular dairy breeds in the world. Their small size makes them capable of withstanding higher temperatures then larger breeds, making them suitable for almost any climate. Jersey cows are world-renowned for their milk production. Jersey cattle can be found throughout the world, including North and South America, Australia, New Zealand, Europe and Asia.

They are efficient grazers and can do well on a diet of grass. Jersey cows are very well known for their milk production: a single Jersey can produce over 11,700 pounds of milk per lactation, over thirteen times their bodyweight. Jerseys are also valued for their success in shows and competition. The bulls, like most dairy breeds, are quite aggressive when they are older. Traditionally, two “types” of Jersey cows were recognized.

They are the American and Irish types, with the Irish types being smaller and more refined then the American Jerseys. Lately, however, the two types have been combined. The average Jersey cow weighs around 900 pounds, small for a dairy animal. This small size makes them better able to withstand high temperatures. 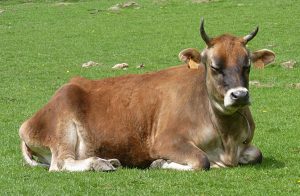 Jersey cows have straight backs and are quite refined in the head and shoulder region. Jersey bulls are, of course, somewhat larger than the cows. They average between 1200 and 1800 pounds and exhibit similar refinement as the females. Jersey cattle appear in a variety of colors, both solid and patterned. While there is little preference, many breeders tend to breed the solid colored cows.

They vary in color from very pale gray to dark brown or black. Most Jerseys are darker on the head, shoulders and hips then on the rest of the body. The exact origin or the Jersey breed is unknown. It is known that they developed on the Island of Jersey, a very small island of the coast of France in the English Channel. The population of cattle on this small British Island, with an area of only 45 square miles, rarely exceeds 12,000 head, although in the early days of the breed’s popularity, almost 6,000 animals were exported.

The Jersey is believed to be one of the oldest breeds of purebred cattle: authorities think that the Jersey has been bred in its current incarnation for almost six hundred years. The Jersey was exported from the Island of Jersey to England as early as 1771. From the beginning, they were highly valued for their milk and butter fat production. The first known Jerseys in the United States were brought there in the 1850s, although records suggest that settlers brought Jerseys with them to the new world as early as 1657. 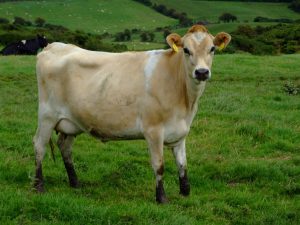 The Royal Jersey Agricultural & Horticultural Society was formed in 1833 and was the first breeders’ association. The Jersey Herd Book was started in 1866. The most prolific growth of the Jersey breed occurred between the 1860s and World War I. Jerseys were first brought to Canada in 1868, New Zealand in 1862, and South Africa in 1880. Jersey cattle were imported to Costa Rica in 1873, Guatemala in 1892, and Brazil soon after.

Because Jerseys became so popular so quickly, many cattle breeders sought to get rich quick on the cows. French farmers took their cattle (Jersey or otherwise) to Jersey for a few weeks, after which they were exported as Jersey cattle. Because of this trick, the courts of Jersey passed a law prohibiting French cattle importation in 1763. In 1878, this law was extended to include cattle from all places.

By this time, Jerseys had become so popular elsewhere that they could easily be acquired. Today, it is believed that there is Jersey cattle on every continent and in almost every country. They are one of the most popular breeds of dairy cattle in existence. In the late part of pregnancy the calcium levels need to be kept low to prevent milk fever or hypocalcaemia. Jerseys calve very easily do to calves smaller size and being fine boned.