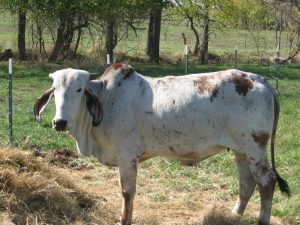 Which breed of cattle has the largest ears? It is the Indo-Brazilian! This elephant of the cattle world dissipates heat through its ears, allowing surviving in extremely hot climates and yet producing good quality beef and milk! Indo-Brazilian Cattle do very well in most extensive management systems. They are hardy and, despite their large size, quite easy to handle.

They respond very well to individual treatment and will come seeking your affection when called! Indo-Brazilian Cattle are heat and insect resistant. At maturity, it is not unusual for Indo-Brazilian Cattle to stand six feet tall and weigh 2,000 pounds. They have short hair, generally gray. Shades may range from silvery-white all the way to dark pewter.

Indo-Brazilian Cattle are generally used for crossbreeding, making other breeds of cattle much more hardy. They produce about six liters of milk each day, even under conditions of extreme heat or drought, and can walk very long distances to grazing or water. On the feed lot, they gain about three-quarters of a kilogram per day.

They are much valued as cross breeders, usually used to improve European breeds, but have been used in such exotic crosses as the Mexican Mini-Cow! Although Indo-Brazilian Cattle do quite well in the United States Gulf Coast winters, they will not thrive in extreme cold or extreme precipitation. Extensive range systems are best for these cattle, which are surprisingly low-maintenance and docile.