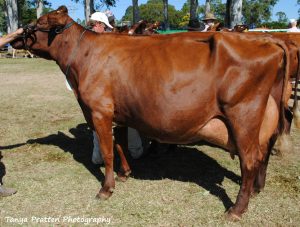 Illawarra dairy cattle, now renowned, were once simply a regionally improved breed of Shorthorn Cattle! With much development, the Illawarra Shorthorn Cow is now an incredible milk producer and docile breed! Illawarra Cattle are quite easy to handle and manage.

They have quiet, easy going temperaments and adapt very well to most management systems. Quite hardy, Illawarra Cattle can resist extreme temperatures and are not prone to sun-related disorders! At maturity, Illawarra Cattle have superb dairy conformation. They are similar in appearance to Shorthorn Cattle and are best described as having a “chunky” appearance.

The bodies are generally wedge shaped, narrow in front and broader toward the back, but without the heavy muscling typical of beef cattle. The hooves and legs of Illawarra Cattle are strong, and the skin has a black pigmentation that prevents sunburn and skin cancers. Generally, the short sleek hair of Illawarra Cattle is bright, rich red, which also prevents sun-related problems. 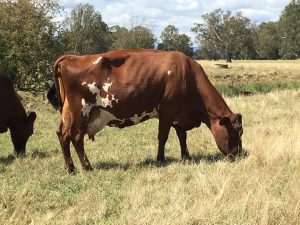 Often Illawarra Cattle sport white flashes on their flanks! Roan colored animals are also quite common. The udder conformation of Illawarra cows should be generous and well attached. The brown teats should be well defined, and are usually 65 to 75 millimeters in length. Lactations last about 300 days and usually well over 10,000 liters, or 40 liters per day, of milk is expected.

The milk is good for cheesemaking, high in fat and protein. Illawarra Cattle may and often do produce 60,000 liters of milk in a lifetime! Originating in the Illawarra region of Australia, this breed springs from simple Jersey Cattle brought to the area and improved to suit the climate. Over the years, Durham, Devonshire, and most prominently Ayreshire Cattle were crossed into the line. The Osborne family around 1829 was producing very influential and productive early Illawarra Cattle. 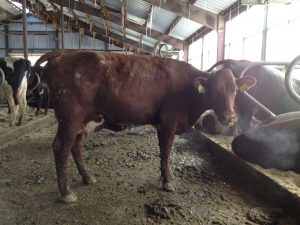 By 1910, the genetic line was closed and the Illawarra Shorthorn was recognized as a breed! Eventually, the Shorthorn part of the name was dropped, to avoid these dairy cattle being mistaken for beef cattle by foreign consumers. Illawarra Cattle continue to flourish and have become popular overseas in regions that are hot or dry. Illawarra Cattle do very well in extensive systems and most are never housed. They can subsist and produce marvelously well on even poor graze and under an extreme range of cold and hot temperatures.

In show, Illawarra Cattle will be faulted for broken, brindled or black markings. Illawarra Cattle are quite fertile and usually begin breeding at two years of age. Because of their excellent pelvic conformation, calvings are extremely easy. Assistance is rarely ever needed. A calf each year may be expected from your Illawarra cow and she will continue to produce through her early teen years. Calves are hardy and have vigorous personalities and hale dispositions.