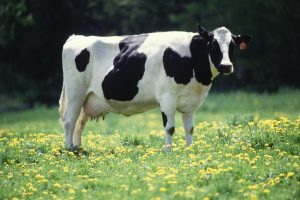 The prototypical dairy cow, the black and white Holstein, is sometimes known as the Friesian in Europe. Holsteins are the most popular dairy cows in the United States and are traditionally considered the best milk producers in the world. The Holstein’s sole purpose in life is that of a dairy cow.

They are capable of giving a huge amount of milk. The average Holstein will produce 21,167 pounds of milk and 775 pounds of butterfat each year, and some animals are capable of producing more than twice that amount if they are milked twice daily. Holsteins were bred to be efficient feeders.

They subsist primarily on a diet of grass, which they have been bred to use well. Nine out of ten dairy farms in the United States use Holstein cows, and they are found throughout the world. Holsteins are one of the few breeds that someone not related to farming or cattle can usually pick out of a pasture full of cows. They usually have the distinctive black and white spots that are so well known, although some Holsteins may be entirely black, entirely white, or red and white. 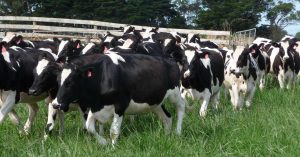 They are large animals, averaging around 1500 pounds, with gigantic udders. Holsteins have wide muzzles, wide faces and long legs. The Holstein is an old breed. It is from the Netherlands, where people started breeding the black Batavian cows with the white Friesian cows over 2,000 years ago. These cows, bred from two native breeds, were better than either one at using feed efficiently.

They grazed on the grass in the delta of the Rhine, and quickly and easily transformed the feed into large quantities of milk. Over the years, these cows evolved into the Holstein-Friesian. In the United States, the “Friesian” was generally dropped. During the migration from Europe to America, for every five passengers a ship had, they were supposed to have one cow as well.

Because so many of the passengers died on the voyage, the cows would be sold at the end to earn money for the Captain. The first known Holstein in the United States was purchased by Winthrop Chenery from a Dutch captain in 1852. Chenery realized that his new cow produced more milk than any of his other animals, and imported more Holsteins in later years. 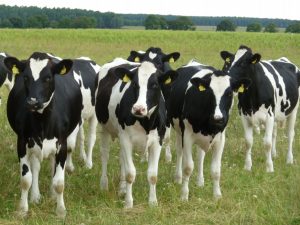 The Holstein trend caught on quickly, and by the late 1800s over 8,800 Holsteins had been imported to the United States. At around this time, a disease known as contagious bovine pleuropneumonia became known in Europe and animals stopped being imported from there. Because new stock was no longer available, Holstein breeders and farmers started various associations and herdbooks.

All the associations merged into the Holstein-Friesian Association of America in 1885. The name Holstein Association USA, Inc was adopted in 1994. When a Holstein heifer reaches about 13 months of age or about 800 pounds, they can be bred. Most breeders wait until their cows are about two years old before breeding them. The calves, which weigh about 90 pounds at birth, are born after a gestation period of nine months.