Fjall, or Swedish Mountain Cattle, is an endangered breed, which we would do well to conserve! These lovely, good-natured dairy cows are in danger of extinction, but fortunately, conservation programs are in place.

Known also as Swedish Highland Cattle, Fjall are good grazers. They are hardy and robust in addition to being patient and good-natured. Fjall Cattle adapt well to most management systems and are fairly easy to handle, although they are given to friskiness!

They do well in cold climates and can survive on poor fodder in harsh weather! A full-grown Fjall cow usually stands about 125 centimeters at the shoulder, and bulls are usually ten to 15 centimeters larger. Mature bulls weigh approximately 650 to 800 kilograms, and cows tip the scales at around 450 kilograms. 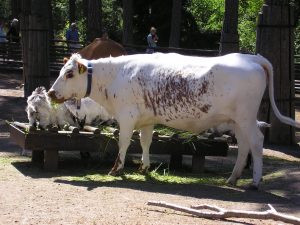 Fjall are naturally polled, making them more easy to handle. Their bodies tend to appear dainty, and their udder conformation is very nice. Although extremely robust, Fjall Cattle have a small bone structure. The average Fjall cow produces 5, 500 kilograms of milk per year! Out of this, four and a half percent is fat and three and a half is protein! Native to Sweden where they are known as Fjaller, Fjall Cattle are genetically very similar to the Norwegian Blacksided Trondheim.

These hornless cattle lived in Scandinavia for centuries before breeders began to improve them. The Fjall breed was established for dairy use in 1893, and the herd book was established in 1907. Fjall Cattle were nearly depleted due to overenthusiastic crossbreeding in the 1970’s and 1980’s.

In 1995, a preservation society was established to keep the breed from becoming extinct, and with the help of frozen sperm from the 1950’s, Fjall Cattle have made a comeback. By 1998, there were about 1,000 cows breeding in Sweden! Fjall Cattle are well adapted to their mountain home and are extremely vigorous and weather resistant. They are lively and do well with exercise.

Usually, Fjall Cattle thrive under management systems in which they are stationary and stabled for about six months of the year, fed on mixed fodder. Fjall Cattle are well known for their ease of calving and very rarely, if ever, need assistance. They are very good milkers and their age at sexual maturity as well as their calving intervals are about average compared to other cattle in the region.

Fjall Cattle do tend to have high calf mortality rates. Today, it is important to breed Fjall Cattle responsibly because of their dwindling number. There are a number of breeding conservation programs in place and over 75 bulls are represented in frozen semen.