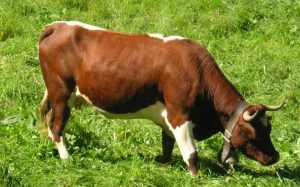 Evolene Cattle are an old breed closely related to Eringer Cattle. They are, however, becoming increasingly rare and are currently kept only by enthusiasts. Bred for Alpine performance, Evolene Cattle are hardy and surefooted, able to tolerate steep or rocky pastures and cold weather.

The breed is generally extremely easy to handle and adapts very well to most management systems. Occasionally, however, aggressive or temperamental individuals are found among Evolene Cattle. At maturity, Evolene bulls weigh about 650 kilograms and stand around 130 centimeters at the shoulder. Cows are about ten centimeters shorter and weigh less at 500 kilograms.

This breed is horned and the coloration is variegated. Usually, Evolene Cattle are red or black, with large white patches on the head, belly and tail. Occasionally, white spots are even evident on the backs of Evolene Cattle. The red coloration is much more common than black.

Evolene Cattle have very small bone structures and their legs are quite thin though strong. Their hooves are very hard and they can live in extremely high altitudes! On the whole, Evolene Cattle appear delicate, betraying their hardy natures! They are quite muscular and have a good carcass yield.

Their milk production to body weight ratio is also extremely good. Traditionally, Evolene Cattle were kept in high Alpine meadows in summer and brought back down to overwinter in more temperate, lower pastures. It is derived from cattle who have existed in the Alpine Wallis region for centuries. In the last century, these cattle became differentiated into Evolene and Eringer Cattle. Evolene Cattle were exported to neighboring Austria and Italy and crossed with local breeds there.

They are stabled for the harshest two to six months of the year and do very well on mixed feed. Evolene Cattle are kept primarily for milking but have also been praised for their beef production. Because Evolene Cattle are so rare they must be bred responsibly.

They have lower milk yields and daily gains than many modern breeds, but they do reach sexual maturity at an average age. They have easy calvings and average rates of calving, calving intervals and calf mortality rates. Evolene cows produce enough milk for their calves with a good amount of fat and protein in it.